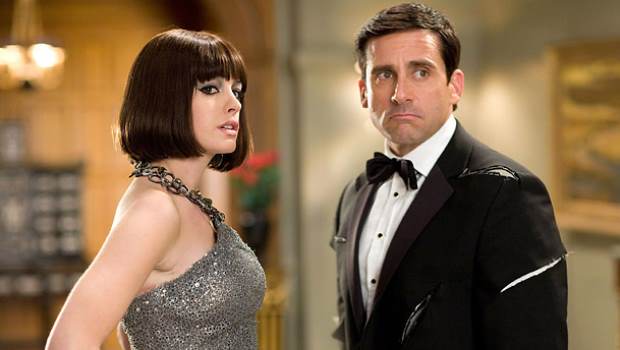 Summary: Get Smart is sort of mildly amusing, and if you were a fan of the original series you might love it.

Get Smart is apparently based on a 1960s spoof spy show. I was utterly unaware of this, so was surprised when the man sitting next to me started happily humming along to the theme music and bobbing his head in time. It should be added that we lowly members of the press had an unusual treat at the screening – Steve Carrell, Anne Hathaway (who is astonishingly pale), Dwaye ‘The Rock’ Johnson and director Peter Segal showed up to introduce it, no doubt on their way to some more glamorous ocassion. Still, it made us feel big and important for about five minutes.

Maxwell Smart (Carrell) wants to be a secret agent. Luckily he works for CONTROL, the US government organisation that thwarts plots by evil dooers and generally keeps the world safe for democracy. Unfortunately, though incredibly dedicated, earnest, tenacious and keen to get out in the field, he is such a valuable analyst that his boss, the Chief (Arkin), needs him in the office. So Max is frustrated, but does his duty, until CONTROL’s nemesis, KAOS, attacks HQ and exposes the identity of all the agency’s key operatives, giving him his chance at last.

He is partnered, by default, with Agent 99 (Hathaway), the only experienced agent whose identity has not been compromised. She is disgusted at having to work with a rookie, and it doesn’t help that Max is clumsy and maladroit, confirming all her worst fears. Worst of all, the team need to hit the ground running, and while Max is great at the theory, he has never worked in the field, or had anyone try to kill him. Max’s clumsiness, however, is due to his enthusiasm, and he soon recovers from setbacks and starts to prove himself.

Get Smart is sort of mildly amusing, and if you were a fan of the original series you might love it, but a lot of the jokes are weak, connected to ridiculous gadgets of the kind that Roger Moore-era Bond used to get from Q. It all seems oddly innocent and old-fashioned; a homage to a spoof of a genre that has recognised that, if it wants to find an audience, it needs to ditch the gadgets and stick to the garottes. The cast are clearly enjoying themselves – Carrell is a very funny man, but he needs better material than this, and we know Hathaway can act, kick butt, and look great in Chanel, so she too needs to move on. Speaking of which, where does she keep getting all those outfits from?