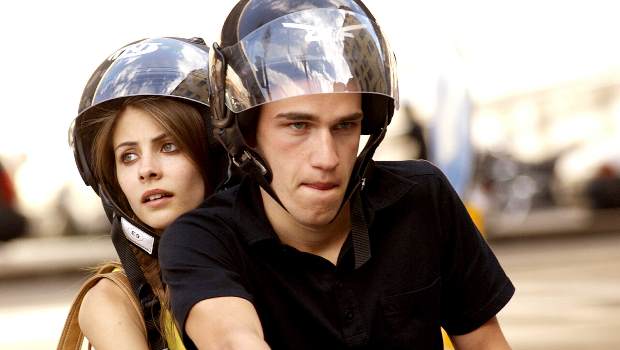 Summary: A meditation on grief and a gentle character study.

Genova (released in the US as A Summer in Genoa) is the latest film from Michael Winterbottom (In This World, A Mighty Heart) and is a return to more intimate subject matter. Starring Colin Firth as Joe, a grieving widow who moves to Genoa with his daughters, ten year old Mary (Haney-Jardine) and her older sister Kelly (Holland), after their mother Marianne (Davis) is killed in a car crash, the film is a meditation on grief and a gentle character study in which the city plays as big a role as any of the actors.

As a British academic working in America, Joe doesn’t hesitate when he is offered a year teaching at an Italian university; though friends advise against taking the girls away, he believes that a fresh start is what they all need. Luckily he has an old friend living in Genova: Barbara (Keener), a fellow Harvard graduate and academic, who is happy to help find them an apartment and generally get settled in. Barbara and Mary bond over local history, while Kelly, a gorgeous leggy sixteen year old, rapidly makes new friends, proving a hit with the local boys. Joe arranges for both girls to have piano lessons but, as he is teaching during the day, cannot be there to look after them. Tired of babysitting her little sister, Kelly often stomps off leaving Mary to her own devices and it is on one such occasion that Mary thinks she sees Marianne for the first time.

Mary is plagued by nightmares, but after this sighting she sees Marianne regularly and is comforted by the fact, though of course she doesn’t tell anyone. Barbara, however, proves sympathetic and Mary plucks up the courage to confide in her. In the meantime Kelly is spending more and more time with her new friends, to Joe’s concern; she is out every night and becoming more and more defiant, reacting with hostility to any rules.

The first thing that struck me about Genova was the demands places on Perla Haney-Jardine by the director. Mary is the only character in the film who is openly mourning, but what mourning! She is regularly required to weep uncontrollably and scream for her dead mother; not just to cry but to be utterly hysterical and inconsolable. It seems almost cruel, though she rises to the occasion with aplomb. Nonetheless, Joe’s stiff upper lip attitude to his younger daughter is surprising, considering that he is woken from sleep by a wailing child on a weekly basis.

But that’s the film’s point; the brutal fact is that life has to go on. Mary is clearly not happy, but she is holding it together, learning Italian, practicing piano, cooking for the family; likewise Joe and Kelly both find ways to pass the time. It’s the mundane act of getting through the days, finding their own ways out of sorrow. Joe, as a single dad, has to work, to feed the girls, to impose some sort of framework to their lives and the huge issue of their mother’s death is, not ignored, but just there. Another part of the way they live now.

The resemblance to films like Don’t Look Now will not be missed; a grieving family in an Italian city which is both threatening and exotic (displaced Americans in a possibly corrupt and unsettling Europe is of course a literary tradition stretching back to Henry James). Winterbottom thickens the soup by making Joe English – he and his daughters also come from different cultural backgrounds; one imagines that Italy is not alien to him, but the narrow, grafitti-strewn alleyways of the medieval town are potentially sinister as well as liberating. Similarly the mysterious figure of Marianne; heavenly protector or sinister will’o’the’wisp? We will never know, and that’s good, too.