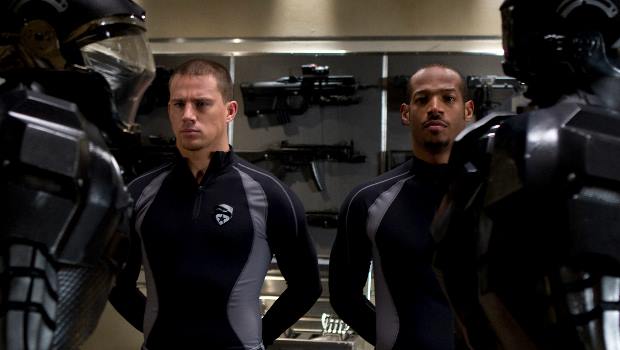 Summary: If G. I. Joe was a Saturday morning television cartoon lasting 45 minutes it would be far more palatable.

Playing with action figures when I was a child, G.I. Joe toys (known to me then as Action Force) were one of my favourites. Special weapons for each character ranging from oversized guns to futuristic devices and all manner of vehicles, buildings and bases to go with them meant the fun was almost endless. Along with comics and an animated series it was a world you could immerse your hyperactive imagination in. Bringing such a well-loved franchise to the big screen could only be done in summer blockbuster form, and Stephen Sommers has done a Michael Bay by tossing aside plot logic in favour of an almost constant barrage of action set pieces which might entertain the kids, but adult fans might feel hard done by.

For the uninitiated, G. I. Joe is an elite military force made up of the best soldiers from across the globe and led by General Hawk (Quaid). Among his top troops are a mute ninja Snake Eyes (Park), weapons expert Heavy Duty (Akinnuoye-Agbaje), foxy smart girl Scarlett’ O’Hara (Nichols) and technical whiz Breaker (Taghmaoui). They are called into action when a NATO convoy runs into trouble transporting a new warhead capable of mass destruction. The two sole survivors are soldiers Duke (Tatum) and RipCord (Wayans) who request to join G. I. Joe to help track down the mysterious assailants who attacked them in transit, including a woman named The Baroness (Miller) who seems to have some history with Duke. Some 15 minutes in, the good guys have been identified and a glut of bad guys are introduced including a rival ninja called Storm Shadow (Lee), arms dealer McCullen (Eccleston) and a mad scientist called The Doctor (Gordon-Levitt) and all that’s left to do is put them into numerous situations where their high tech gizmos cause explosions, crashes and general mayhem across the globe.

Credit to Stephen Sommers, his last two summer movies The Mummy Returns and Van Helsing were disappointing. The former suffered from losing the fresh appeal of The Mummy amid a misplaced family issues subplot while Van Helsing got tied up in its own backstory behind the various monsters featured. For G. I. Joe he sustains a breakneck pace by keeping explanations to a minimum and squeezing in the occasional flashbacks to add a bit of weight to the histories of the characters which don’t hang around too long. He’s far more interested in giving us vast, James Bond-like bases for heroes and villains alike, then blowing them up with gleeful abandon. A Paris-set chase sequence sees cars thrown in every direction and a devastating attack on a famous landmark halfway through the movie but it is at this point G. I. Joe seems to have already had its cake, eaten it and then gone back for about three more.

Despite clocking in at less than two hours, G. I. Joe simply doesn’t know when to tone down the global domination talk or the cheesy all-American military strike action to save the day. You’ll give up wondering how the right gizmos show up at the right time or why guns which once stopped helicopters accurately in mid-flight suddenly seem less effective when main characters are involved, while the showdowns between the two ninjas are poorly edited and confused further by special effects. Performances range from the over-the-top Eccleston and Gordon-Levitt while Tatum, Wayans, Nichols and Miller are there to show off their bodies and little more: you’ll know the words to come out of their mouths before they say them.

If G. I. Joe was a Saturday morning television cartoon lasting 45 minutes it would be far more palatable, but as a full-length feature film it’s too much of a no-brainer. The twists come at the end to set up a sequel in which the Cobra force will raise its ugly head, though it’ll probably be the younger members of the audience calling out for more as the adults think back to the days when it was just them and their toys.