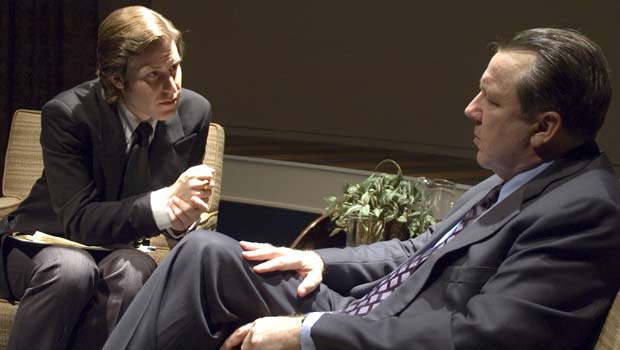 Summary: The five Oscar nominations, including one for Langella’s performance, were well deserved.

When a British talkshow host with few credentials to his name outsmarted a U.S. President known to be guilty of betraying the American public he served, it was a triumphant television moment no one watching on from the sidelines thought could happen. Richard Nixon earned the nickname “Tricky Dick” for his deviousness, and thought he would be on to a simple payday while David Frost gave him an easy ride through all aspects of his presidency, including the Watergate scandal which caused him to quit. He was almost right, and Frost/Nixon shows how close underdog Frost came to losing everything over eight hours of a one-on-one chat with Nixon.

Michael Sheen has quickly become an A-list celebrity impersonator: he’s twice played former Prime Minister Tony Blair, once taken on the role of football manager Brian Clough and here returns to be now respected television presenter David Frost after first taking on the role in a stage play. His ability to match the mannerisms and vocal delivery of ambitious and charismatic fictionalised versions of real people is building a strong reputation for the performer. Here, as David Frost, he shows the confidence of a man known as a playboy and keen to win top ratings in America by bagging Nixon into an exclusive interview, then the signs of desperation as a brave front thinly covers his concerns that he won’t get material that backs the former president into such a corner that he admits he is guilty for the Watergate scandal.

Told in a quasi-documentary style where the supporting cast “reminisce” about their experiences to camera while also appearing in the dramatisation enables director Ron Howard heighten the emotion and sense Frost is walking himself into not just losing a small fortune, but also ruining his career. Charismatic researcher James Reston, Jr. (Rockwell) and Frost’s producer John Birt (Macfadyen) express their lack of confidence, especially when Frost wastes some of his best ammunition in the first two hours of filming, and things only get worse as the sessions continue.

But it isn’t just Sheen who performs strongly with a realistic portrayal of Frost; Langella does a fine job of pulling off a masterful impersonation of Nixon. Measured, manipulative mind games and an ability to weave even the most probing question into a positive answer giving little away, Langella’s Nixon is a formidable foe. Backed by a canny advisor, Swifty Lazar (Toby Jones), and military man Jack Brennan (Bacon), he has the Goliath-style big guns to fend off Frost’s David position as an underdog. Resenting his forced retirement, Nixon is convinced of his righteousness and just “wants to put the record straight” by putting himself back in the public’s good books and back on America’s political map: a dangerous opponent to a no-name interviewer.

Watching the pair duel in a battle of wits makes for compelling viewing as Sheen and Langella trade verbal blows. When the humbling comes, it’s a hard fought and deserved victory but never suggested to be a sure thing. This is a dramatisation rich on character where reaching the pre-conceived ending is tense and exciting. The five Oscar nominations, including one for Langella’s performance, were well deserved.