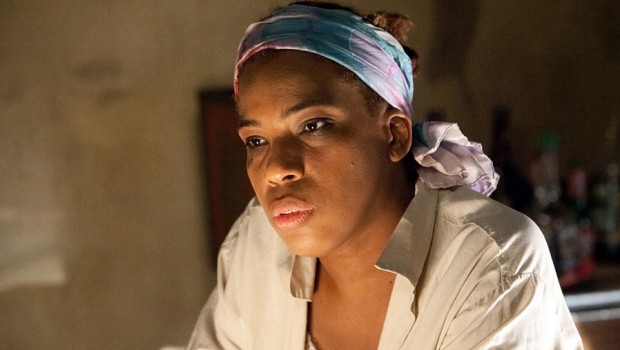 Summary: It’s refreshing to see an all black cast, in a film that places black women’s stories front and centre; it’s just a shame that the stories are such downers

For Colored Girls, the latest film from prolific writer/director/producer and genuine phenomenon Tyler Perry, is based on ‘For Colored Girls Who Have Considered Suicide When The Rainbow is Enuf’, a 1970s ‘choreopem’ and stage play by Ntozake Shange, a black feminist writer. I saw Shange perform her poetry on stage in Oxford in the eighties, and she was marvellous – her outrage at wat crack was doing to the black community was palpable – but nevertheless, For Colored Girls is typical of that early wave of feminist writing with all its strengths and weaknesses.

Perry has adapted the play, updating it and giving the play’s characters, known only as the colours of the rainbow, names; the characters lives interweave and intertwine. Gilda (Rashad) is the manager of an apartment block; keeping a close eye on her neighbours she hears through the thin walls the fights between fragile Crystal (frequent Perry collaborator Elise) and her abusive partner, struggling veteran Beau Willie (Ealy) and the comings and goings of barmaid Tangie (Newton). Tangie’s behaviour is a reaction to the strict upbringing she suffered at the hands of her ultra-religious mother Alice (Goldberg); where she failed with Tangie, Alice is determined to be more successful with younger daughter Nyla (Thompson), a promising dancer taught by Yasmine (Rose), who runs a studio for teenagers and helps them go to college on scholarships.

Janet Jackson plays Jo, Crystal’s boss, a magazine editor clearly based on Anna Wintour. Jo, who extremely successful in her own right, has a troubled marriage to Carl (Omari Hardwicke), a stockbroker who feels emasculated by his controlling and powerful wife. Though Crystal has worked for her for years, she has no idea of Crystal’s domestic problems. Gilda, on the other hand, fearing for the safety of Crystal’s children, calls social services, who send Kelly (Washington) on a well meaning but ultimately futile visit to assess the situation. Kelly is herself desperate to have a baby with her husband, Donald (Hill Harper). And finally there’s Juanita (Devine), fundraising for her women’s centre where she hands out condoms and advice to young women, but struggling to resist her faithless boyfriend’s blandishments.

For Colored Girls is a pretty bleak experience; it’s pretty much the opposite of feelgood. Certainly men come out of it really badly: given a rope, they will pretty much hang themselves. They will rape, cheat, beat, steal, impregnate, infect. It’s hardly surprising that, by the end of the film, there isn’t a man in sight. But the women don’t really come out of it much better; the film implies that they have allowed their situations to develop and so in some ways have only themselves to blame. So men are bastards and women are mugs, unless, like Kelly, you get really really lucky. Shange’s stores resonated because, when she wrote them in the seventies, no-one was telling stories like this. Thirty years later, clearly, men still rape and cheat and beat and steal, but you’d hope the women would have moved on – it feels dated, as does the backstreet abortion storyline.

It’s refreshing to see an all black cast, in a film that places black women’s stories front and centre; it’s just a shame that the stories are such downers.