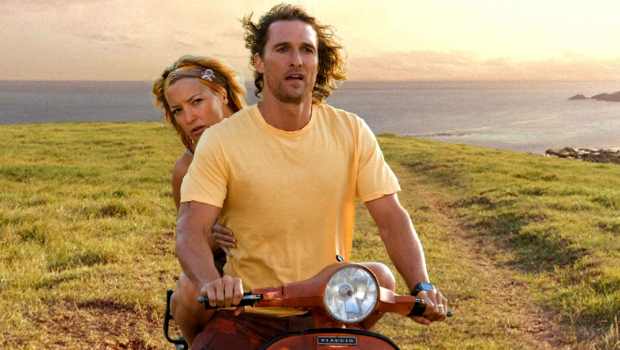 Summary: There are lots of gorgeous Caribbean settings and the whole thing looks beautiful and is lots of fun.

Fool’s Gold is a pleasant surprise, reinventing Hudson and McConaughey as a Douglas and Turner for the Noughties. Anyone expecting a rerun of the sickly How To Lose A Guy In Ten Days will be disappointed – this is much more Romancing The Stone, and much more fun for it.

We first encounter Ben ‘Finn’ (McConaughey) as he and his right-hand man, Alfonz Bremner), vacuum the ocean floor in search of the legendary Queen’s Dowry – 40 chests of priceless Spanish treasure that was lost in the Caribbean in 1715. Unfortunately the crappy equipment Finn is using causes his boat to explode, to the extreme displeasure of his backer, ruthless gangster rapper Bigg Bunny (Hart), to whom Finn owes $65,000.

And that’s just the beginning of Finn’s problems; his long-suffering wife Tess (Hudson), tired of living on air and dreams, is suing him for divorce. Tess is finally beginning to get her life together, working as a steward on Precious Gem, a mega-yacht belonging to English billionaire Nigel Honeycutt (Sutherland), and the last thing she honestly needs is for Finn to turn up, spot an opportunity, and charm his way aboard, using all his charisma to convince Nigel and his bored airhead daughter, Gemma (Dziena) to join the treasure hunt. So the race is on; Bigg Bunny has hired Moe Fitch (Winstone), Finn’s one-time mentor, to join in the pursuit.

One of the nicest things about Fool’s Gold is that it skips all the elaborate hoops that rom-coms normally have to jump through in order to keep Mr and Mrs Right apart for the appropriate 95 mins until the big snog at the end. You know, the ridiculous misunderstandings, the stupid fights, the diary reading, the evil girlfriend. In Fool’s Gold, we know that Finn and Tess are made for each other; they managed eight years together and they share a real passion for history. Its just become a little twisted, and made Tess think that she wants the safety of academic tenure and a man with more than fifty dollars Finn, he just needs to strike it rich and remind Tess of what bought them together in the first place, Thankfully, the filmmakers steer clear of predictably tedious ‘reversals’ – Finn shows no romantic interest in Gemma, and Tess isn’t wracked by jealousy – she knows he is in the grips of gold fever.

And the plot has more than enough reversals for anyone with lots of fun red herrings and false trails and midnight grave-robbing. It also shows the treasure hunt requiring some mental agility and the need to understand more than one language – seeing Kate Hudson play someone intelligent is refreshing but the film also emphasises that there is more than one kind of intelligence. However Tess is also not afraid to defend herself and doesn’t stand passively by allowing Finn to get beaten up on her behalf. She still looks undernourished, mind – poor girl has no breasts left – but she’s positively buxom compared to Alexis Dziena, who has classic lollipop head; you could play the xylophone on those ribs.

Donald Sutherland brings some gravitas to all the derring-do; Winstone fails to do a convincing American accent; there are lots of gorgeous Caribbean settings and the whole thing looks beautiful and is lots of fun. The perfect early summer treat.