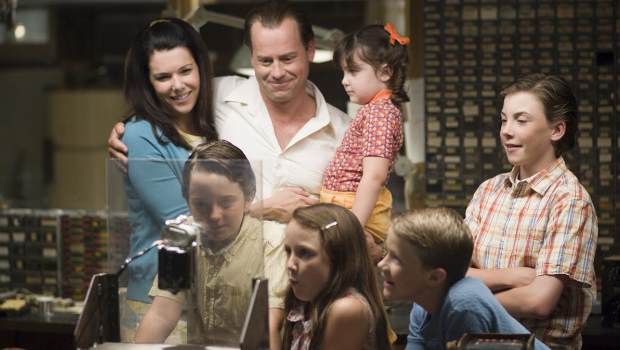 Summary: The pace overall is sluggish and unengaging.

Flash of Genius is a cautionary tale for all would-be Dragons Den-style inventors and entrepreneurs who think they’ve hit upon a fabulous get-rich-quick scheme; the true story of Robert Kearns (Kinnear) who watched as the Ford Motor Company stole his ‘intermittent windscreen wiper’ and spent the next twenty years trying to get them to acknowledge the theft.

Robert Kearns is a bright professor and engineer at the University of Detroit; happily married to his beautiful wife Phyllis (Graham), and bringing up their large Catholic and traditional family. His quirk is inventions; he and his sons spend evenings and weekends happily tinkering in their basement while his wife looks on indulgently. One day, while driving in the rain, Kearns has the flash of genius of the title – the inventor’s eureka moment. The windscreen wipers on the family car are useless, and he knows how to make them work better. He spends the next months perfecting his design and persuades Gil(Mulroney), an old friend and car dealer, to help him apply for the patents. While these are still pending, Kearns is invited to a meeting with Ford.

At this point, the dollar signs flashing before his eyes, Kearns rents a factory in order to start manufacturing his wiper. And then Ford pulls out of the deal. Kearns is gutted, but philosophical, until he sees a car driving in the rain and using his wiper. From that moment on Kearns is on a crusade to prove that Ford stole his technology; a crusade that costs him his marriage, his family, and his mental health.

Hollywood loves a biopic and it loves a true underdog story, so in theory Flash of Genius should be a winner. That it is no Erin Brockovich is due to a number of reasons. It is probably being true to Robert Kearns’ character but the man is grouchy, rude, stubborn, cussed, and lacking any kind of charm; this makes it hard to identify with his struggle. It may also just be me, but windscreen wipers are not particularly compelling. No-one would be surprised that Ford are unscrupulous; why Kearns didn’t simply license the technology to them and sit back and watch the cash roll in is never explained. The third act, where Kearns represents himself in court, is probably meant to be charmingly hokey, but is actually rather annoying, and the pace overall is sluggish and unengaging.

In the end, Kearns’ struggle is not unjustified, but its not like he is fighting for some great and noble cause – he is in fact the only person who benefits from his crusade, while his entire family are hurt and damaged by it. It’s almost a celebration of selfishness; quite odd really.