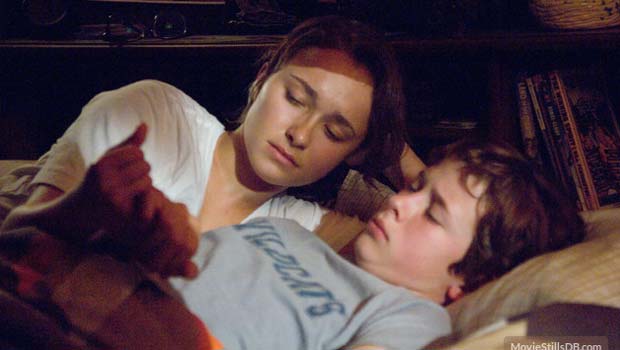 Fireflies In The Garden Review

Summary: In the end though, the moral is a bit trite, but the journey isn't a dull one.

Julia Roberts is now of a certain age and, after Duplicity, its interesting to see her starting to play the ‘mum’ roles in films. Fireflies in the Garden is her second film this year, and she plays Lisa, wife of Charles (Dafoe), an academic and old-fashioned disciplinarian. The film opens with Michael (Reynolds), reluctantly traveling home to celebrate his sister’s graduation. But on arrival, the celebration is cut short by the death of his mother in a car crash, and instead the family, including Lisa’s younger sister Jane (Watson), must gather together and plan the funeral, and in the process confront their demons, deal with the past, and move on.

Fireflies In The Garden is a classic American independent film, a family melodrama that’s as well written, acted, and filmed as any, striving for significance but not quite achieving it. Its basic premise is that all families are dysfunctional, but actually the disfunction is purely on Charles’ side. Lisa is presented as lovely, thoughtful, charming and kind, and this is reinforced by the fact that she is played by Julia Roberts. Charles on the other hand is sometimes borderline sadistic, particularly towards Michael, and is played by Dafoe, who usually plays villains and psychotic lunatics. The question therefore becomes why does Lisa stay with a man who is clearly damaging her children and is willfully cruel?

There are some hints that Lisa was an academic herself and that, once the children have flown the nest she is beginning to rediscover a life of her own, but that she had lost her own identity in her attempts to be a good wife and mother. But sadly this gets lost; there are almost too many stories here. Michael’s marriage is coming apart, but we learn little about this until his wife Kelly (Moss) turns up, seemingly wandering in from a different film set. But where its strengths lie is in showing how memory works; how sometimes it can be selective, and then when we dig a bit deeper we realise that memory was only half the story.

The film is shot (by Roberts’ husband, Danny Moder) with a bleached palette that suits its focus on nostalgia and memory. The cast are uniformly good; it’s all competent, but its somehow not completely satisfactory. In the end, Charles is perhaps not cruel enough for Michael’s adult dread of him to ring completely true. Certainly he is strict and sometimes excessively harsh, but mainly he is cold and withholding of approval, let alone love. Ryan Reynolds is increasingly proving that he really can act, and here is very good despite a rather unfortunate beard. Dafoe plays Charles as a man who doesn’t know how to express his feelings and is playing the role of a Victorian father because that’s all he knows; seeing the very English Emily Watson as a middle-America housewife is odd, but she plays Jane as warm and loving. In the end though, the moral is a bit trite, but the journey isn’t a dull one.