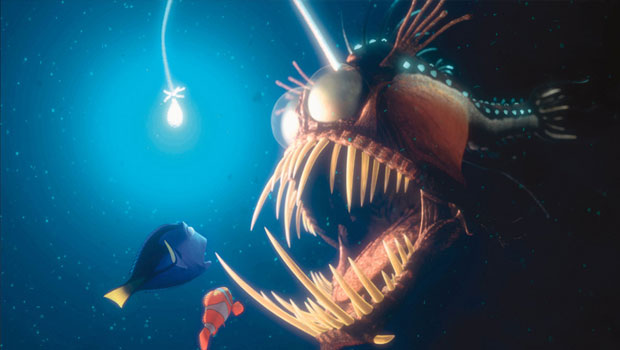 Summary: Overwhelming fact that this is such an enjoyable film to experience.

OK, so it looks like the kind of place everyone would want to work, with people whizzing to and from their plush, open-plan offices on push-bikes , stopping off to have a cappuccino and a frame of pool with Mike from Creative Accounts. But c’mon – there must be something dodgy happening down at Pixar. How else do you explain the fact that they have not yet made a poor film, that each offering looks better than the last and that their most recent efforts have led to what is perhaps the most impressive looking animated film ever made?

Well, they should keep doing whatever they’re doing because it damn well works. Whether it’s their much-vaunted commitment to story, the fact that they employ the best in the business, or that they have sold their collective souls to the Cartoon Devil, Pixar have managed to create Finding Nemo. And this stonking film is a perfect example of Total Cinema, combining tragedy, excitement and humour, all wrapped up in one amazing looking package.

So, why does Finding Nemo work quite as superbly as it does? Well, the most simple answer has to be its setting. Toys are fun, bugs look interesting, and monsters can let the imagination run wild, but the sea is something else altogether. Who isn’t fascinated by the depths of the waters that cover a majority of the Earth’s surface? Whether it’s the colourful beauty of the coral reef, the weird and wonderful smorgasbord of sea-creatures, or the complicated and sometimes vicious ecosystem in which these creatures live, life under the waves offer up a hugely creative field that the canny team of Pixar have ploughed and ploughed again.

Of course, Pixar need an engaging story on which to hang their brilliant animation, and they have come up trumps again in Nemo. Albert Brooks plays Marlin, an American Clownfish who (bizarrely) lives in the Great Barrier Reef with his cute little son Nemo. Years after suffering a horrifyingly traumatic incident which sees his wife and hundreds of baby eggs taken from him, Marlin is now incredibly over-protective of Nemo, a feisty little fish with a withered fin and a desire to see the world that his anxious father feels is full of danger. Following a dangerous prank that goes horribly wrong, Nemo gets scooped up and taken to the fish tank of an Australian dentist living in Sydney. Marlin, determined not to lose the vestiges of his family, sets off in hot pursuit, and from here on in, the story splits into two strands. One strand follows Marlin in his quest as he meets a vast array of sea-dwelling creatures along the way (including Ellen DeGeneres as Dory, a warm-hearted fish with short-term memory loss) and the other stays with Nemo as he and his tank-dwelling compadres (led by the excellent Willem Defoe as Gill, the scarred sea-dweller whose constant bids for freedom make Steve McQueen look quite lazy) attempt to escape their watery prison to the freedom of the sea.

So – a film that looks good and has an engaging story are two parts of Pixar’s winning formula. But what they do to really tip the scales in their favour, and what Dreamworks took to an even greater level with Shrek, is to create lovingly-developed characters who are drawn for the kids but who speak to the adults whilst occupying a world filled with contemporary humour.

Yet whereas the likes of Woody and Mike Wachowski were lent the well-known and occasionally intrusive voices of Tom Hanks and Billy Crystal, Finding Nemo employs actors who are not famous enough to be bigger than the role they play, thereby letting the nuanced characterisation and cracking dialogue to come to the fore. Brooks, DeGeneres and Dafoe are all superb and make great use of a fantastic script, without over-egging the pudding. And they are joined by a brilliant cast of extras, which include surfer-dude-turtles, cleanliness-obsessed French shrimp, aggressive-as-Russell-Crowe-crabs, lacksidasical herons and a trio of sharks engaged in a step-help programme whose motto is ‘fish are friends, not food’. (As an aside, one of the sharks is a Great White called Bruce. This, hopefully, is an intended dig at the man who has a connection with another famous shark called Bruce, namely a certain Steven Spielberg, who now runs Pixar’s main rival animation company, Dreamworks. Or it could be because the shark is Australian.)

Being a kids film, Finding Nemo is over-sentimental in parts, and people might be irked by the fact that, although set in Australia, the main characters are American. But this is small fry compared to the overwhelming fact that it is such an enjoyable film to experience. Not wanting to carp on about it, but if you cod see any film in October, book a plaice in your local multiplex and go see Finding Nemo. You’ll have a whale of a time!

Related: Q and A with Lee Unkrich and Andrew Stanton