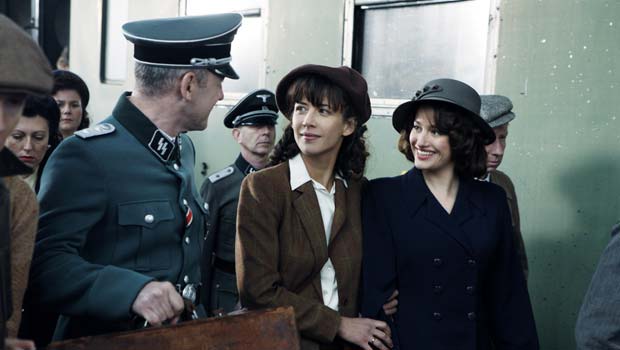 Summary: Equally superficial, but at least its in French.

Did D-Day really depend on a bunch of slightly ditzy French girls? Luckily, it did not, and as we know the Normandy landings succeeded, the outcome is never in doubt. Also the title is awful – the French title, Femmes de l’Ombre, is much better, suggesting mystery and skulduggery and leaving lots open to interpretation.

Louise Desfontaines (Marceau), a successful French operative in the British Special Operations Executive, leaves occupied France after the death of her husband during a sabotage mission, returning to England where her brother, Pierre (Julien Boisselier) is also working for the allied forces. Her commander, the amusingly named Colonel Buckmaster (Colin David Reese), gives her a new misson: to rescue a British geologist who has parachuted into France on a recce in advance of D-Day and been captured by the Nazis. Louise and Pierre quickly recruit a small troop of girls from the nurse’s corps and French Resistance, a mixed bunch who do not all have either the training or the mentality to make great spies, but time is of the essence, and after all, it’s war don’t you know.

Louise, Jeanne (Depardieu), Suzy (Gillain), Gaelle (Francois) and Maria (Sansa) parachute into France with Pierre and carry out the daring raid on the hospital where the British agent is held. The raid is successful, but the British officer reveals a new complication: Colonel Heindrich (Bleibtrau) knows about the D-day landings, and so Pierre orders them to travel to Paris in order to prevent Heindrich passing on the information to the German command; basically, a suicide mission.

The team are betrayed and a few of their members are captured, but Louise discovers a plan to assassinate Heindrich, using Suzy as a honey trap. Years ago she had an affair with Heindrich and he is still passionately in love with her; Louise will be hiding in the tunnel, armed with a rifle. Heindrich turns up, but none of the team can get a clear shot, and he manages to escape again.

The cat and mouse games continue and this is one of those films that its hard to summarise without giving away the whole plot, so suffice it to say that the Allies won the war, though not without loss and personal sacrifice on both sides.

Is it any good? Female Agents has ambition, which is refreshing in a European film. High production values and a decent budget, a complex plot and a fair old dose of glamour and a high profile female lead in the curvy form of Sophie Marceau, who does, it must be said, look fabulous. A little too fabulous maybe; right after being punched in the face, she’s back on screen with only a slightly puffy lip, ready to take down the enemy. All the women, considering they parachuted into France, have amazing wardrobes and are perfectly coiffed at all times. Mind you, they are French.

But it’s this kind of inconsistent plotting that is irritating, and undermines the film’s intergrity; in the end, would anyone have allowed the entire success of the D-Day landings to rest on the shoulders of a bunch of untrained women? Apart from Louise, all the other girls are nurses or prostitutes, entirely unfit for this kind of mission. One buckles under torture the minute her first nail is pulled out. Ordinary people did take part in extraordinarily heroic missions, but one would hope they had a bit more training first. Still, if you don’t fancy one of the big Hollywood blockbusters you could do worse than this; its equally superficial, but at least its in French.