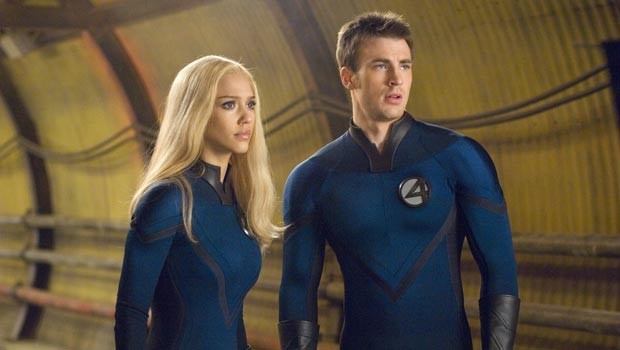 Summary: Fantastic? Not really, but it will definitely keep the kids entertained for a while and the adults may enjoy it more than they would like to admit!

This latest high-gloss, high-action offering from the Marvel camp is based on its longest running comic book series about four ordinary astronauts who have an accident in space and become a team of superheroes!

The film kicks off with brilliant-but-broke scientist Reed Richards (Ioan Gruffudd) and his best mate Ben Grimm (Michael Chiklis) begging old-school- rival-turned-billionaire Vincent Von Doom (Julian McMahon) to let them use his space station to collect data from a passing dust cloud so they can get a better understanding of human genetics and use their knowledge to cure all diseases (or something). Von Doom sees the financial potential in their quest and agrees to help them out. Enter Von Doom’s beautiful genetic scientist, Susan Storm (Jessica Alba), who once went out with Richards but now appears to be Von Doom’s trophy. Of course, Von Doom insists that Susan comes along for the ride and she in turn announces that her hotheaded little brother Johnny Storm (Chris Evans) will be piloting the mission! You can see where this is going, can’t you?

That’s right, they go into space, start bickering, then realise too late that Richards’ calculations aren’t quite right and they end up being exposed to the dust cloud, which fundamentally alters their DNA, giving them bizarre-but-useful abilities! Their new talents emerge while in the hospital wing of Von Doom’s ski-resort facility and it’s fair to say not all the team members are thrilled with the changes. Understandably enough, Grimm is slightly miffed that he has turned into a walking, talking rock so he walks through the hospital wall and heads for the city. Realising that he probably shouldn’t be left to walk the streets, the rest of the team go after him and before you know it they are saving lives and wearing matching costumes!

Unbeknown to them, however, Von Doom has also inherited special powers and he is now determined to get revenge on Richards, whose miscalculation has cost Von Doom his company. Sporting a very fetching metal mask given to him by the people of Latvaria (where?!), he becomes Dr Doom- quite literally a man of steel. Will the Fantastic Four defeat Dr Doom and save civilization as we know it? Will Ben learn to live with his rather heavy new body? Will Reed and Susan kiss and make up? Will Johnny stop acting like such a moron?

Of course, we all know the answer to these questions already, but that’s not the point of the film! The charm of Fantastic Four lies in the relationships between our team of accidental superheroes, something that other comic book characters don’t have because they are isolated and can’t tell anyone their secret identity etc etc. Without this baggage, our four protagonists can get on with driving each other nuts. The dynamic between the characters works pretty well most of the time, though the relationship between Reed and Susan is a little forced. Johnny Storm and Ben Grimm have a love/hate relationship which provides a lot of the comedy and there are a few laugh-out-loud moments, but perhaps not as many as there could have been.

Johnny Storm (Human Torch), played confidently by Chris Evans, is the ‘lovable rogue’ character- he’s young, glory-seeking, punchable. His older sister Susan (invisible woman) is emotional (well, she’s female isn’t she?) but also has a tough side so she can keep the rest of the motley crew in check. There are moments where the sparkle of Jessica Alba shines through, but for most of the movie she is limited by a script which doesn’t give her a lot of scope. The same can be said of Ioan Gruffudd’s Reed Richards (Mr. Fantastic) who isn’t given much depth beyond the old ‘cute but nerdy’ science boy stereotype. To give credit to Gruffudd, he does play it light and has a bit of a twinkle in his eye! Julian McMahon hams it up superbly as Dr Doom- his is the kind of performance you will either love or hate, but the star of the show is undoubtedly Chiklis as Ben Grimm (The Thing) who’s comic delivery is spot on. I really liked the fact that The Thing is a guy in a suit, rather than CGI, because it really gives him substance on screen. His transformation is the most dramatic and he has the most involving storyline (and the best lines).

The source material has been tampered with slightly, so fans of the comic may feel aggrieved, but on the whole Fantastic Four is an enjoyable romp which doesn’t take itself too seriously. Fantastic? Not really, but it will definitely keep the kids entertained for a while and the adults may enjoy it more than they would like to admit!