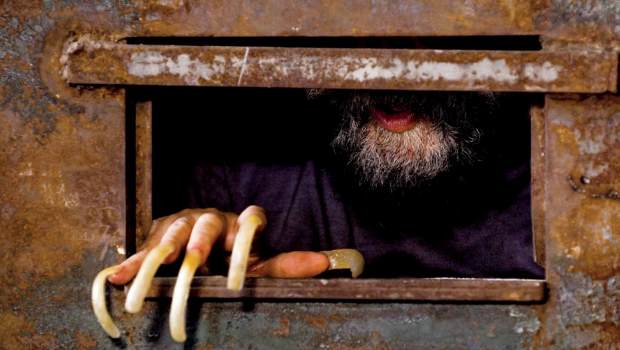 Forty years is a long time to wait for the conclusive part of a cinematic trilogy, but that’s exactly the time it has taken Brazilian writer-director-star Jose Mojica Marins to realise the final instalment of his “Coffin Joe” series of movies. Embodiment of Evil (Encarnação do Demônio) sees the horror maestro round off the events started in 1964’s At Midnight I’ll Take Your Soul and 1967’s This Night I’ll Possess Your Corpse with a gore-laden finale.

To the uninitiated – and that included myself – Coffin Joe is a sadistic undertaker who was imprisoned in a mental ward for 40 years after being found guilty of kidnap, torture and murder. Coffin Joe is a real basket case of a villain who believes he is superior to everyone else, wears a black suit, black cape and top hat and likes his finger nails long. Backed by a quartet of fanatics, once free he gets back on track to complete his diabolic quest for “the continuation of the blood” – in other words finding a woman to bear his son and keep the Coffin Joe spirit alive. Never has he needed the right woman more than now – he’s wasted 40 years stuck behind bars and it running out of time. So he reteams with servant Bruno on a quest to find the ideal woman and willing to kill any who are not up to the task or get in his way. But Joe, driven by madness fuelled by visions of the ghosts of his former victims and a purgatory-like landscape filled with human suffering and depravity, is being hunted. A Sao Paulo policeman and a mentally unstable priest have vowed to track him down before he completes his quest.

Darkly raw and unafraid to mix nudity with gruesome scenes of bodily torture, Marins retains a kitsch 1960s style for Embodiment of Evil in-keeping with the two black and white films in the series. This is necessary as Marins indulges in exploring the realms of the fantastic through his horror: in one scene Coffin Joe injects controversial eugenicist Dr Hilda (de Paris) with drugs, then she has visions of him cutting off one of her buttocks which she willingly eats. Marins revels in these kinds of freaked out moments: we also see creepy crawlies coming and going from orifices and at one stage Coffin Joe imagines himself in a maze of intestines. Yet for all the possibility of shock factor, the fact Marins is well known as an exploitation director and has such retro stylings that make the film seem such close matches to its 1960s counterparts, there is a nostalgia factor which legitimises much of Coffin Joe’s antics in the context of the series. This isn’t simply torture porn or an excuse to put images on screen mainstream cinema would class as outrageous, this is Marins wanting to give Coffin Joe a real send-off, which he does so in classic horror form which fans will love. Of course, that means its got a wacky nature and makes little sense unless you’re Coffin Joe himself so if you’re a casual viewer of horror films you might want to swot up on Marins previous efforts or just get your mind set to the bloody daft side of shock cinema.