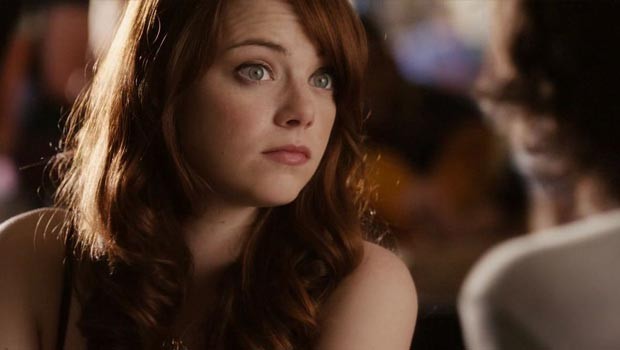 Getting high school comedy right a tough feat and, just as Mean Girls took the trials and tribulations of one girl’s attempts to fit into the complicated popularity structure of teenagers while taking a few pot shots at the ‘rules’, Easy A is a witty offering showing how a lie which changes your social standing can have repercussions you’d never expected. At the centre of this mistruth is 17-year-old Olive (the soon-to-be-seen in Spider-Man Stone), who makes up a story of dating a non-existent guy so she can get out of a camping trip with annoying best friend Rhiannon (Michalka). It all seems so innocent and she spends the weekend at home, but when Rhiannon asks for details, Olive soon finds herself claiming she spent the whole weekend with the mystery man and – to make matters worst – lost his virginity to him. An awe-struck Rhiannon spreads the news like wildfire and soon Olive finds herself being looked at by every guy as an opportunity, but the girls aren’t impressed.

Olive, though, does her best to make do and live up to her new reputation, which causes all sorts of problems. The Christian sect of the school take a dim view on her actions and soon she finds herself telling another lie – this time faking a bedroom romp at one of the biggest parties of the year to help a gay guy get recognised as a heterosexual. An amusing clothed bedroom scene with plenty of grunts and groans later and the pair emerge to new found popularity: he’s getting the plaudits from the lads while Olive is now firmly labelled as a tramp – a lie that eerily echoes the life of Hester Prynne in the novel “The Scarlett Letter” she just happens to be studying. But before you think this might be another shoe-horned melding of real life echoing art, up pops Olive speaking to her webcam talking down that same topic and ensuring Easy A doesn’t take itself too seriously.

Olive narrates the whole film in typical high school comedy style effectively, but what really makes the movie is the teenage angst is sugar coated, there’s no reliance on gross out moments to sustain interest and it’s genuinely funny with a lively script and a supporting cast of excellent adults to compliment a Lindsay Lohan in Mean Girls-like performance of Emma Stone. Thomas Hayden Church is the deadpan teacher and a surprise appearance of Malcolm McDowell is typically off-beat. Olive’s parents’ laid back approach to raising children and frank conversations make the most of Stanley Tucci and Patricia Clarkson while Lisa Kudrow manages to almost shed her longtime “Pheobe from Friends” image for a whole cameo. Which such a vibrant mix of actors, all that’s left is for Emma Stone to take ownership of this film as a shy homely girl who adopts a slutty persona – and has fun with it. She sasses it up but also has all the nagging doubts of a girl living a lie for show. Light-hearted and genuinely funny, Easy A should see Stone win an army of fans – she just needs to avoid the Lohan-like pitfalls that might bring.