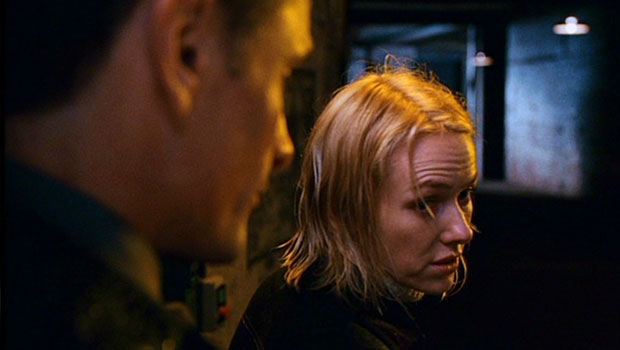 Summary: It's not all good; the final twist is unnecessary and sometimes its all a bit excessive.

A late-night chemist is a pool of light in a shabby high street in a part of London unknown to Richard Curtis; a junkie stumbles in, clutching her pregnant belly and asking for help. The chemist brusquely tells her that he cannot give her methodone without a prescription, but that’s not the kind of help she needs. Rushed to hospital, she dies in labour. Her midwife, Anna (Watts), is deeply affected by her plight and resolves to find the baby’s family with the help of the girl’s diary. Which is written in Russian, a language Anna neither reads nor speaks. Initially she hopes to find answers at home, with the help of her Russian uncle Stepan (Skolimowski), but he urges caution; when a clue takes her to the Trans-Siberian restaurant owned by the affable Semyon (Mueller-Stahl), Anna begins to realise how right Stepan was.

For Semyon is not just the owner of a restaurant. He is part of the Russian mob; the head of a family in the Vory V Zakone criminal brotherhood, and his avuncular exterior masks a coldly brutal core. Anna’s investigation brings her to Semyon’s attention, and threatens to expose his business, and that of his son, Kirill (Cassel), whose actions have set off a gang war. Working for the family as a driver is the mysterious Nikolai (Mortensen), bound to the Vory by oath and yet attracted to Anna and the glimpses of another, more innocent world that she brings him. As the family tightens its grip on him, Nikolai finds his loyalties divided.

Following up A History Of Violence, David Cronenberg has once again teamed with Viggo Mortensen to make another film about identity, family and, well, violence. As in the earlier film, Mortensen plays a man who is in many ways a mystery to everyone including himself. In the earlier scenes, he has an almost robotically eerie impassivity that is characteristically Russian but also expressive of his inner emotional state; he is extraordinarily controlled and cautious. He does as he is told, he doesn’t question orders, even when a drunken Kirill demands that he have sex with one of his girls to prove that he isn’t gay, he does it. When he meets Anna, something about her naivite appeals to him (though he also seems to like her bottom); her dilemma brings out his innate compassion; Mortensen succeeds brilliantly in showing the different sides of a complex and conflicted character.

Naomi Watts, normally quite irritating, matches Mortensen in a less showy role. Anna is stubborn; her own vulnerability makes her determined that the orphaned baby will not suffer. When she meets Nikolai, she is scared of him, but is also intrigued (who wouldn’t be, after all?); though she rapidly gets out of her depth, this is believable because she is, after all, just an ordinary Londoner who can’t believe that sex trafficking is going on behind the net curtains of the three-bed semi down the tree-lined street. Both leads are excellent, but the outstanding performance is from Armin Mueller-Stahl. Like Forrest Whittaker as Idi Amin, Mueller-Stahl has that ability to go from charming old gent in a cuddly jumper to stone-cold killer in a nano-second and his old world manners are all the more chilling for it. Less successful is Vincent Cassel’s Kirill, who seems to be permanently on the verge of hysteria and almost always drunk.

Actually everyone in the film drinks constantly. But if you’ve met any Russians you know that they are what the government is calling ‘hazardous drinkers’ so this is true to life. Perhaps not all Russian gangsters wear Armani and drive Mercedes, but, hey, it’s not a documentary. And it makes it easy to identify the bad guys. What people may find disturbing is the level and detail of the violence, but again this is a violent world where life is cheap. The London locations are brilliantly realised though no tourist will be coming here on holiday on the basis of this film. London is cold grey stone, winter-chilled, contrasting nicely with the cosy interior of the Trans-Siberian restaurant, opulent red velvet tart’s boudoir and crazy accordion playing, and the pools of blood that punctuate the film. Most notorious will be the scene set at the Ironmonger Road baths, where Nikolai is attacked by Kurdish gangsters. This scene will ensure the film’s notoriety for some time to come, but Mortensen is to be praised for his commitment to authenticity; who keeps their underwear on when having a fight to the death in a sauna?

It’s not all good; the final twist is unnecessary and sometimes its all a bit excessive, with the Russian accents and the sunglasses and the leather and the tattoos and all, but its also blackly humorous and genuinely tense, with some superb performances and a stonkingly good fight scene.