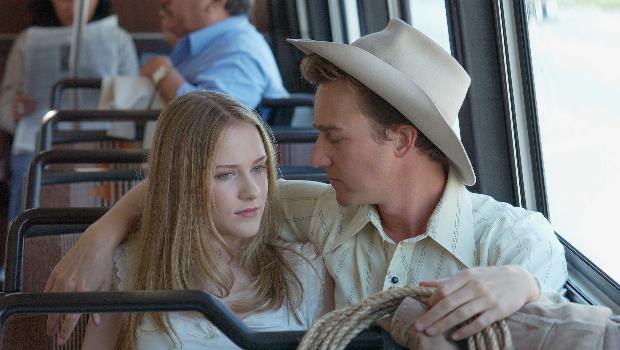 Down in the Valley Review

Summary: Down in the Valley is an unsettling, haunting view of the modern West.

Tobe (Wood), a high school senior, is a typically bored Southern California teenager. Living with her overbearing, violent father, Wade (Morse) and timid, whey-faced younger brother Lonnie (Culkin) in a lower-class neighbourhood on the edge of the San Fernando Valley, Tobe and her friends while away the summer vacation smoking pot and taking trips to the beach.

On one such trip, Tobe meets Harlan Fairfax Carruthers, a drifter who looks and acts like something out of the old west. Charmed by Harlan and his hokey, aw shucks ma’am persona, Tobe invites him to come with them to the beach. Harlan has never seen the ocean, and Tobe is pleased to show it to him – later, after they’ve had sex in his motel room, he tells her he wants to take her out properly. ‘This is fine and all,” he says, “but it ain’t a proper way to meet.’

So Harlan comes to Tobe’s house, and meets Lonnie; sensing his loneliness Harlan invites him along. Wade, returning from work, encounters Harlan and is immediately suspicious, but Tobe doesn’t care. She is drawn to Harlan and his gentle manner, and they rapidly fall in love. And when Wade tries to separate them, naturally it all goes disastrously wrong.

Down in the Valley is a film of two halves. The first is a lustrous, golden-hewed paen to young love. The Southern Californian suburban landscape of tract houses, motorways, scrubby palm trees, gas stations and fast food restaurants is dusted with sunlight. The wildness has been tamed out of this world, where the hillsides are dotted with electrical pylons and new housing developments, but Harlan is a throwback to an older, more innocent time. He takes Tobe riding, refusing to own a car because ‘they kinda make you lazy’. He addresses Wade as sir and expresses a hope that he will eventually win his trust.

Which is the first clue that Harlan is not all that he seems – having spent the previous night rogering Tobe senseless, however politely, he has already abused Wade’s underage daughter, and then proceeds to take her drinking and take ecstasy (Tobe’s, admittedly) with her. Harlan’s good old boy act rapidly wears thin, until by the time we see him rehearsing dialogue from an old Western we realize that it is, in fact, a delusion that Harlan has bought into.

The film explores contrasting ideas of masculinity in the figures of Wade and Harlan. Wade is, frankly, a neglectful, confused and poor father, with serious anger management issues and a huge gun collection. He tells his stepson Lonnie that America is tough on the weak, and seems unwilling or unable to spend time with him. Harlan’s ideals are that of the Old West, but he’s a man out of time, lost and lonely and isolated and, frankly, barking mad. But Ed Norton manages to endow him with such charm that we go along with his version of himself until his frustration and impotent rage boils over, with tragic, almost overdetermined consequences.

Where the film turns into Badlands is where it starts to go wrong, sadly. The last third drags out, strewn with false endings that feel repetitious and, eventually, tiresome. But with great performances from Norton, Evan Rachel Wood playing a prettier, softer version of the troubled teen in Thirteen, David Morse and Rory Culkin, Down in the Valley is an unsettling, haunting view of the modern West.