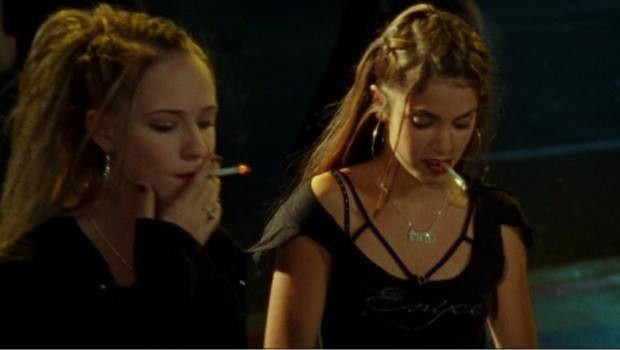 Summary: The film offers no answers, leaving little but the harrowing sound and fury of children growing up too fast.

A hormonally-charged, occasionally hysterical film, Thirteen is hardly your typical portrait of teenage girlhood. But first-time director Catherine Hardwicke’s film benefits from a tremendous conviction in its own angst, boasting a screenwriting credit for adolescent co-star Nikki Reed’s autobiographical contribution. This, and an utterly mesmerising central performance from Evan Rachel Wood, alongside solid support from Holly Hunter, gives Thirteen a compelling edge that overrides its excess.

Hardwicke sets her stall out immediately, with two young girls high on hallucinogens smacking each other around the face with increasing severity, giggling all the while, unable to feel the pain. A trailer for heavier material to come, comparisons to Larry Clark’s Kids are unavoidable, but this is actually the superior film – its shock tactics channelled into a blistering character study of Tracy (Wood), who despite the rattling pace of the script and the insistent handheld camera completely commands the screen.

A seemingly well-adjusted if slightly geeky teen, Tracy has a penchant for poetry and a close relationship to her mother Mel (Hunter), a hardworking single-parent and recovering alcoholic trying to live beyond her means raising Tracy and her brother Mason (Brady Corbett). But Tracy yearns for more and desperately ingratiates herself with Evie (Reed), the coolest girl in school. Under Evie’s tutelage, she quickly graduates from shoplifting and provocative dressing with piercings, to emotional assault of her mother for her relationship with “loser” boyfriend Brady (Six Feet Under’s Jeremy Sisto), sex, drugs and petty criminality.

Tracy’s swift metamorphosis from good to bad girl is implausible, but the pace gives her disintegration an urgency that permits Hunter to seem permanently dazed, something she conveys with engaging despair. The character of Evie is problematic, particularly as the reasons she gives for her own bad behaviour are largely debunked, leaving the viewer unsure as to Hardwicke’s intentions. Is Evie simply a renegade little sweetheart or has society dressed her up this way? The film offers no answers, leaving little but the harrowing sound and fury of children growing up too fast.