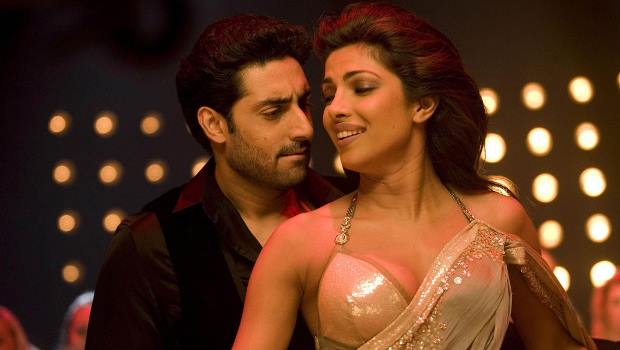 Summary: This is a great, fun entertainer with lots of charm and great music.

Dostana meaning Friendship is the latest movie from whiz-kid Karan Johar, this time as a producer. It’s a hip remake of that Hollywood goofball Sandler classic – ‘I Now Pronounce You Chuck and Larry’ and looks fantabidozy.

We have two strapping hunks in nurse Sameer (Bachchan) and photographer Kunal (Abraham), both on the look out for a new place to live in Miami. Fate finds them bumping into each other a couple of times before they do a double take at the viewing of a stunning penthouse apartment in downtown Miami. The apartment is perfect, but the owner is only looking to lease out the available rooms to girls, as her stunning niece will also be staying there.

Sameer then suggests he and Kunal take up residency as a gay couple, and so begin the shenanigans. As the guys spend more time with their new flatmate Neha (Chopra), they both begin to fall for her, each trying their best to woo her. Fashion scribe Neha, completely oblivious to the fact they’re actually straight, attempts to set them up with her male boss in lieu of a promotion. In the midst of this Sameer’s traditional (read as domineering) Punjabi mother arrives, as well as the immigration officer trying to verify their recent ‘civil union’…

When Neha’s new suave boss at Verve magazine – Abhimanyu Singh (Deol) enters the fray, it adds a sharp twist to the tale. When Sam and Kunal see him as a threat, he’s the target of many a prank, which somehow manage to backfire on them spectacularly. Deol lends further sophistication to the enterprise, and yet another gorgeous bod.

Dostana is a fabulous rom com, and a great amount of fun. It’s light and breezy and never takes itself too seriously. At the same time it’s not insulting to the viewer, as many desi comedies nowadays often are. It plays to gay stereotypes immensely, down to sailors outfits, overt campness, a penchant for pink, and the thought that all males working in fashion are patently homosexual.

The leads share a great chemistry, are easy on the eye and oh so charming that they, alongwith beautiful Miami make for a visual treat. Abraham is great as the slightly homophobic Kunal, Chopra looks ravishing as the damsel happily sandwiched between the hunks, and Bachchan with his stellar comic-timing is clearly having the time of his life. Chopra’s exit from the water in a glimmering gold swimsuit would put Bo Derek to shame, and there’s also a blink and you’ll miss it song cameo from Ms Shilpa Shetty shimmying on South Beach.

It’s definitely more laughs than tugging at the heart strings, though love is, as always, at the centre of it all. This is a great, fun entertainer with lots of charm and great music. Go check it out!