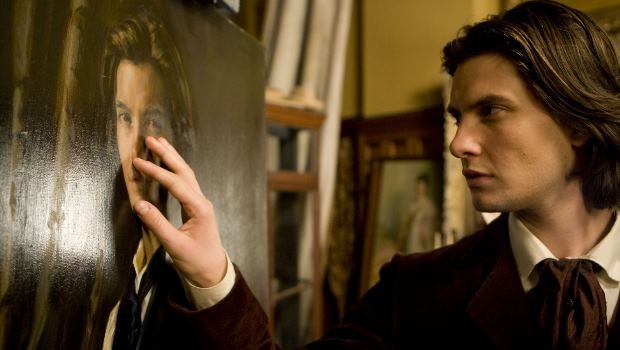 Oscar Wilde’s Picture of Dorian Gray has been adapted for the cinema a number of times before, most memorably in 1945 with the wonderfully machiavellian George Sanders as the seductive Lord Henry Wotton, who teaches Dorian his pernicious creed and creates a monster. The story of the boy who sells his soul to stay young and beautiful seems particularly relevant to our own youth and beauty obsessed age, and is no doubt why director Oliver Parker was happy to tackle a third Wilde adaptation (he and producer Barnaby Thompson were behind adaptations of An Ideal Husband and The Importance of Being Earnest).

Dorian Gray (Barnes) is an extraordinarily beautiful and rather sweet young man who moves to London when he inherits his cruel grandfather’s estate. Possessing both looks and money, he soon comes to the attention of London society, in particular Lord Henry Wotton) (Firth) and painter Basil Hallward (Chaplin). Basil, who has a bit of a crush on Dorian, offers to paint him, thus preserving his beauty forever; Lord Henry, as much to annoy Basil as anything, takes Dorian under his wing and sets out to corrupt him, taking him to East End gin palaces and encouraging him in the pursuit of pleasure and sensation above all. When Dorian lays eyes on the painting for the first time, he wishes he could stay as young and beautiful as the painting forever, even at the cost of his immortal soul.

On one of many trips to the pub, Dorian lays eyes on the beautiful and virginal Sybil Vane (Hurd-Wood), an actress, and falls for her like a tonne of bricks. He pays court to her, and they become engaged, to the horror of his upper class friends. Lord Henry, sensing his prey slipping out of reach, slyly engineers a quarrel between the couple; Dorian walks away, leaving the pregnant and ruined Sybil broken-hearted. Basil, visiting Dorian a few days later, is surprised to find him preparing to go out and perfectly cheerful. Basil also wants to know what has become of his painting, which has disappeared from its place over the fireplace. Dorian explains that the light was too bright, and that he has moved the painting somewhere safe.

Dorian’s descent into debauchery continues, egged on by the naughty Lord Henry, who is not half as corrupt as he pretends to be. Dorian is soon enjoying opium, prostitutes of both sexes, orgies, upper class virgins and their mothers, a little gentle S&M, and pretty much anything else that takes his fancy. Through it all, his sweet countenance remains unblemished… but in its new home in the attic, his picture does not. And then one day Basil asks him to lend him the picture, to be the centre piece in a new exhibition. Dorian will do whatever it takes to protect his secret… even kill…

Wilde’s gothic novel is tonally well served by Parker’s film, which presents London as a smog bound hellhole created by the fumes of industry. The Gray’s ancestral mansion is imposing, gloomy, and well – grey. Into this world comes Ben Barnes’ Gray, as pretty, literally, as a picture. Parker has created Dorian Gray, rockstar. He even gives charity piano concerts. More problemmatic is his transformation from sweet young idealist to debauched murderer. It all seems too abrupt; even his rejection of Sybil (altered from the source) is based on one not particularly vicious argument. Some attempt is made at a backstory; Dorian’s miserable old grandfather is revealed to have beaten him severely, leaving him covered with scars. But this in turn undermines the idea of Dorian as an innocent; he is already damaged. Colin Firth seems like a lovely man and he’s a good actor, but his sunny, open face is not suited to the role of a cad. He’s much more convincing as the protective father in the second half of the film. The supporting cast reads like a who’s who of British film and television, but other than Chaplin, Hurd-Wood and Rebecca Hall as Emily Wotton, they fail to make much of an impression through the corsets, hats, wigs and feathers of Edwardian dress.

While the Faustian pact storyline still resonates, this Dorian Gray fails to convince. Endless sex scenes are on show, but they’re not very sexy; what’s more they’re not even as explicit – or as erotic – as Desperate Romantics or The Tudors, both of which go out on the BBC at 9 pm. The seduction of poor Sybil is framed particularly awkwardly, as if Dorian, like an action man, lacks the equipment necessary for the task. The symbolism is sometimes very clumsy – Sybil is playing Ophelia in Hamlet when she and Dorian meet. The visual effects of the painting changing are pure horror and utterly lacking in subtlety. While when Dorian goes on his world trip, I expected at least one shot of him on a ship, or drinking pink gin on a verandah somewhere tropical; clearly the budget didn’t stretch to a few potted palms.

As I left the cinema, I heard someone say they had aged twenty five years while watching the film. Sadly, I concur.