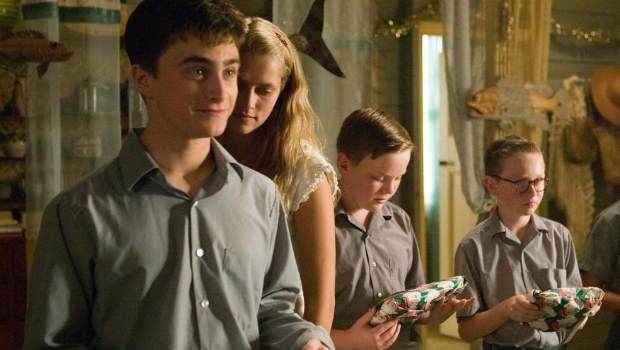 Summary: A little more heft to the drama wouldn’t have hurt.

If it weren’t for the presence of Daniel Radcliffe, it’s unlikely that December Boys would be getting released in this country at all. An Australian/UK co-production, it’s the sort of pleasant, inoffensive, thoroughly dull and instantly forgettable little film that could easily pass for an ITV drama.

Set in the ‘60s, it follows four young lads from an outback orphanage who get to spend Christmas at a small seaside community at the home of an eccentric old couple (Thompson and McQuade). Maps (Radcliffe) is the leader because he’s the oldest, and looks out for the others, Spark (Byers), Spit (Fraser) and Misty (Cormie). Cue lashings of summer fun as the boys fish and play and generally enjoy themselves.

When Misty overhears a conversation revealing that, come the end of the holiday, one of them may be adopted by a childless couple played by Hill and Stapleton, this leads to the younger boys being on their best behaviour to impress their prospective new parents, while Maps gets it on with local lass Palmer.

The focus of attention come the release of December Boys will of course be on Radcliffe’s first non-Potter film role. This is probably a good thing because, frankly, there’s not a lot else to focus on. It’s a strange one for him to have chosen since, while he’s perfectly fine, it really isn’t much of a part. He mostly has to stand around looking surly, concentrating on his Aussie accent. The other young actors are equally decent, but the boys don’t really have distinct enough personalities to make any of them memorable or to make you interested in which of them gets chosen. A little more heft to the drama wouldn’t have hurt – it’s not as though they’re mistreated back at the orphanage, so it’s not the end of the world if they don’t get adopted.

For a 100-plus minute movie, not a lot happens. There are only so many scenes of beach-side frolicking and adolescent whimsy a person can take before it all becomes a little sickly. On the plus side the cinematography is truly gorgeous, partly because the wonderful locations help, but DoP David Connell has beautifully captured the shimmering ocean and sand dunes that could be from a David Lean film. The ‘60s soundtrack is quite country flavoured, but delivers some mildly diverting tunes that perfectly complement the blandness on screen.