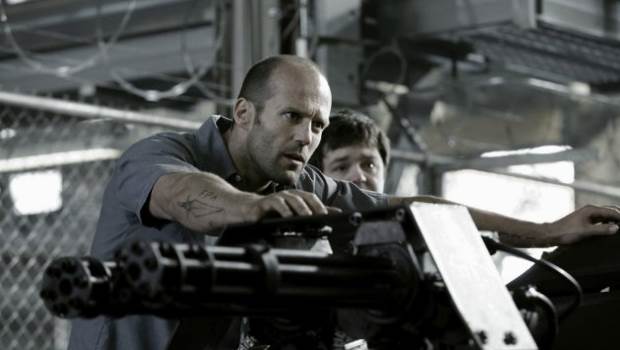 Summary: Death Race has the expected crash, bang and wallop of wrecked cars, explosions and endless gunfire, but it’s a characterless film off and on the track which only makes it good for a disposable Friday night lads flick.

In the near future, convicted criminals get the chance to earn freedom by taking part in Death Race: a series of events which see heavily armoured cars fitted with big guns and other powerful weaponry vie for first place or die trying. Win five and they can walk free, a feat never achieved before and one that masked driver Frankenstein is edging closer to until he seemingly dies on track. Enter Death Race creator, Warden Hennessey (Allen), the prison warden of the Terminal Island prison where the racing convicts are chosen from. She has been keeping crowd favourite Frankenstein on track by replacing him with a new driver each time he is killed: but she makes a fatal error of framing three-time speedway champion Jensen Ames (Statham) for a gruesome murder so he will take part in her races. It’s only a matter of time until he learns the truth.

Brit writer/director Paul W.S. Anderson has a habit of taking big ideas and condensing them to fit a small budget. This might be good for profit margins, however rarely are the results so positive. His Alien vs Predator and Resident Evil films were little more than exercises in bringing popular characters to the screen and getting them to shoot a lot: Death Race takes Roger Corman’s classic Death Race 2000 and strips it down to people, well, shooting a lot – just this time they happen to be in cars. Watching the heavily armoured cars race around tracks, activating their weapons and then attacking each other may sound more like a videogame experience than a gripping movie, and you’d be right. It is also about as fun as watching your friends battle it out on a console while you look on feeling left out.

Death Race might not be so alienating if it didn’t take itself so seriously and Anderson hadn’t restricted himself to a vision of the future so soaked in greyness. The prison is grey, the cars weave around grey warehouses on a grey track and even the vehicles themselves are grey. There’s no suggestion of character to the vehicles despite ranging from 4×4 beasts to Jensen’s Mustang V8 Fastback, and certainly no go-faster stripes or neon lights in the style of The Fast and The Furious. Its lifeless looks aren’t helped by Anderson’s lifeless characters off track, either staring at each other coldly while offering vague threats if rivals, or giving knowing nods and smiles if allies.

If only there was some semblance of life to Statham beyond his deadpan glare and deep voice, or any of his generic bad boy rivals led by Tyrese Gibson. Lovejoy himself, Ian McShane, does provide light relief as Jensen’s coach and Anderson throws in a beauty in the form of Natalie Martinez to accompany the beast in Statham’s car, but these are token parts and everything takes a back seat to the racing. Yes, Death Race has the expected crash, bang and wallop of wrecked cars, explosions and endless gunfire, but it’s a characterless film off and on the track which only makes it good for a disposable Friday night lads flick.