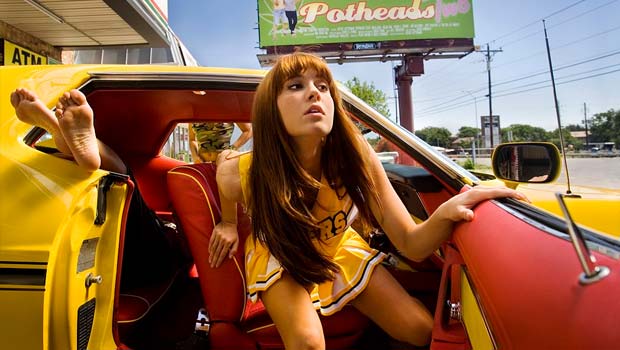 Summary: Death Proof is Tarantino’s most purely enjoyable action film, all the style and verve of Kill Bill with little of the flab.

Half a film or the only good thing to come out of a failed experiment? Following the financial disaster that was the US release of Grindhouse, us European types are only getting to see Quentin Tarantino’s Death Proof and Robert Rodriguez’s reportedly inferior Planet Terror as entirely separate entities. Gone then are the fake trailers, the retro buzz and, most importantly, the value of seeing two films for the price of one.

Of some compensatory worth is the fact that the stand-alone cut of Death Proof is some twenty minutes longer than the Grindhouse version. On the other hand, much of the reinstated material is dialogue heavy which, in a film that expands its early scenes almost to breaking point for no great reward, is not always a good thing.

The bare bones of a plot involve Stuntman Mike (Russell) picking up girls in his reinforced stunt car before subjecting them to terrifying and deadly ordeals – the car you see, is only “death proof” for the driver, as the unfortunate McGowan finds out when she accepts a lift home. This comes only after a good 45 minutes of barroom preamble, as a group of girls on a night out (Ladd, Poitier, Ferlito) shoot the breeze with each other and the seemingly charming Stuntman Mike.

The second half is more of the same; a couple of fairly substantial chat scenes involving four new girls (Dawson, Bell, Thoms, Winstead) followed by carnage on the open road, only this time, two of the girls happen to be stunt drivers themselves, able to give as good as they get. This is where the amazing Bell comes to the fore, the real-life stunt woman performing miracles on the hood of a Dodge Challenger without recourse to CGI.

Slow stretches aside, Death Proof is Tarantino’s most purely enjoyable action film, all the style and verve of Kill Bill with little of the flab. The car crash that ends the first half is a breathtaking slice of gory mayhem, so good he shows it four times, the better to see people getting mangled in slow motion. The moment it becomes something very special can be pinpointed to the exact frame, as Tarantino’s gift for rescuing iconic actors thought to be past their prime comes to the fore once again. Kurt Russell has been slumming it for years but, as Stuntman Mike’s first victim climbs into his car, watch him flash a smile directly at the camera and see a movie star and a director in perfect harmony.

Planet Terror could offer a similarly visceral experience, or it could well suck, but we’ll need to wait until November to find out. We may never experience Grindhouse as it was intended, but that may ultimately prove the salvation of Death Proof.