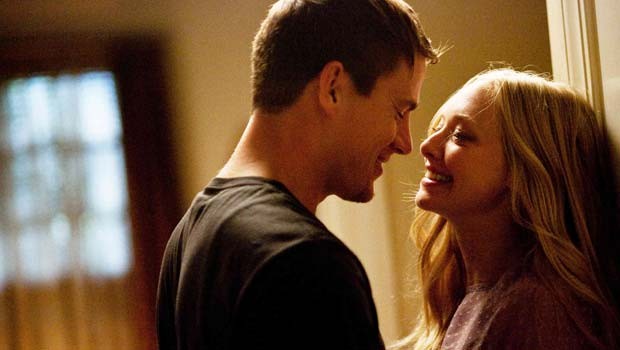 Summary: The Republican politics expressed in the film are just the icing on this unpleasantly conservative cake.

John Tyree (Tatum), a handsome, soft-spoken Special Forces soldier, is home on leave in South Carolina, visiting his reclusive father (Jenkins). Out surfing one day, he comes to the rescue of Savannah Curtis (Seyfried), a pretty student, who as a thank you invites him to join her and her friends for a beer. Despite the differences in their backgrounds, the two click immediately and are soon spending every moment together, though John is very aware that his furlough only lasts two weeks. Clearly this is more than just a holiday romance, and when John returns to his unit they promise to write (how old-fashioned! what’s wrong with email and skype!?). And, incredibly, they do actually keep it up, secure in the knowledge that John’s tour is coming an end. And then 9:11 happens, and everything changes…

Dear John is a soppy romance from Lasse Hallstrom, who also bought us Casanova and The Shipping News, and Nicholas Sparks, writer of another soppy romance, The Notebook, and if you liked that you’ll probably like this. Like most romances, it’s fairly improbable. John, though a good looking hunky surfer, has anger management issues (which I’d have though military training would have taught him to control) and is certainly not from the same social milieu as Savannah, whose family own a beach house and a small plantation. Savannah has her future mapped out; one of nature’s philanthropists, on graduating she plans to work with special needs children, an ambition fueled by her friendship with her neighbour Tim (Thomas) and his autistic son Alan (Braeden Reed).

Autism is used here as a convenient plot device; Savannah’s experience with Alan leads her to diagnose John’s father as having behavioural problems. John angrily denies this but as his dad is an anti-social recluse who is only interested in his coin collection, it seems a bit of a no-brainer. Savannah’s insight does lead John to realise that he has neglected his father – John’s mother has long gone – and Savannah genuinely wants to bring Mr Tyree out of his shell. It actually comes as a huge relief when things start to go wrong between John and Savannah as up until then she has been depicted as boringly perfect – smart, pretty, rich, popular, kind and considerate.

Oh I don’t know; its not that I don’t believe in love at first sight; I do. But this love is so sugar coated and sickly, I just didn’t believe in it for a moment. Its no fault of the actors, who do what they can with the material they’re given. But the characters never came alive; they’re wooden archetypes with no interior life. To be honest, how Lasse Hallstrom continues to have a Hollywood career astounds me, given his propensity for churning out this kind of hackneyed sentiment. The Republican politics expressed in the film are just the icing on this unpleasantly conservative cake.