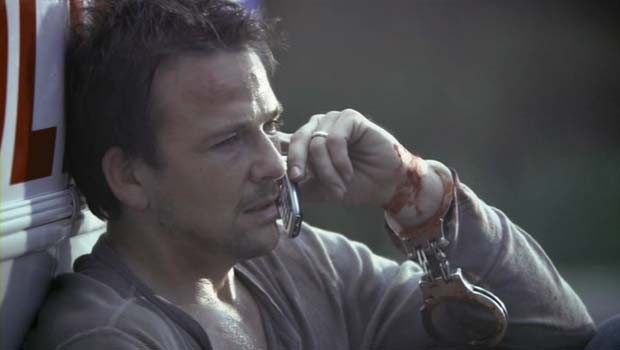 Deadly Impact goes in hot with a real teaser of a trap for a group of Albuquerque police enforcers. Opening with a Saw-like puzzle in which cop Tom Armstrong (Flanery) must choose whether to defuse a bomb by shooting his wife in the heart or sacrifice himself and his officers along with his wife to a bomb in a house, it racks up the tension straight from the off. While taunted over the phone by a criminal mastermind called The Lion (Pantoliano) he’d been on the verge of tracking down, Tom makes the heart-wrenching decision to sacrifice the woman he loves for the sake of his officers. And then the plot fizzles.

Immediately cutting to eight years later, a grief-ridden Tom is sitting in a bar in Mexico downing shots when FBI agent Isabel Ordonez (Serano) introduces herself and asks for his help tracking down The Lion. Initially declining, Tom can’t resist showing up at the night club where The Lion’s expected to show up. It proves a fruitless escapade when another of The Lion’s traps is expertly executed and he gets away while the FBI holds Tom at gunpoint. Invited onto the case Tom finds himself veering towards another showdown with The Lion.

Despite it’s cracking start, Deadly Impact quickly becomes a cop thriller that tries to be clever but relies on contrived set pieces that need actions to be carried out in far too specific ways that they are far beyond The Lion’s control. His plotting to hold Albuquerque to ransom includes a hotel bombing in which he dons two disguises in order to set the pieces in place which could come undone on numerous occasions if staff didn’t question some dubiously placed pot plants and a wooden box left on an otherwise empty bar. Screenwriter Alexander Vesha clearly doesn’t have much respect for the common sense of hotel workers. Meanwhile, Tom finds himself develop a close relationship with the vacuous acting of Serano as the sympathetic Ordonez to provide The Lion with the personal angle of attack that apes his previous victory over Tom.

Shot on bland sets with generic supporting characters, Deadly Impact’s saving grace is in its stars. Pantoliano does well to sustain interest by imbuing The Lion with a real sense of Jigsaw-like menace as he taunts his victims in their life-or-death situations and Flanery is game as his plaything, however there’s too much skulking around police stations to sustain the tension so sorely needed. The opening scene remains the best and when The Lion does run into trouble, it’s not as satisfying as it should be. After such a riveting start, Deadly Impact seems to be on course to making The Lion a classic cinematic criminal yet winds up lacking the drive to keep pulses above a rate akin to when watching an episode of an average police television series.