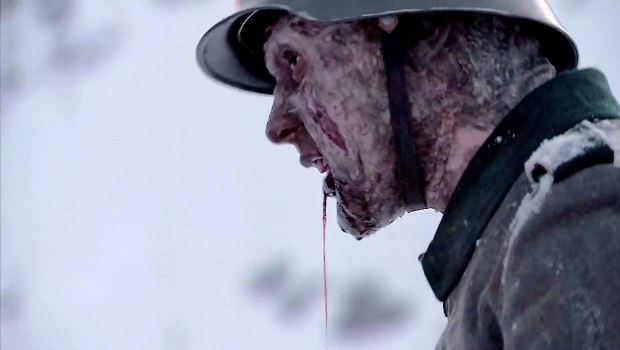 Summary: It’s not high brow entertainment, but it is done very well and if you’re a horror fan you’ll love the references.

Breathing life into the filmic undead, Norwegian writer/director Tommy Wirkola has produced a tongue-in-cheek zombie movie which revels in clichés while adding a dash of original humour. The friends who find themselves in danger during an Easter vacation in a remote mountain cabin has been done numerous times before, but throw in Nazi zombies of the smart, 28 Days Later variety and you have a gorefest where you can cheer every lost limb decapitation as references to horror favourites Braindead and Evil Dead get knowing nods.

Seven medical students drive up to their friend’s log cabin in the mountain for a fun-filled holiday: four guys varying from the nerdy to the hunky drive along a picturesque mountain road followed by three girls joking about which one of the guys is ‘theirs’. All’s well for the start of the vacation, and the thought of having no mobile phones to contact anyone sees them to laugh off suggestions they are walking into a similar scenario as Friday the 13th – how wrong they are. We’ve already seen the eighth member of the group attacked in the opening sequence and it is this self-referential fun Wirkola employs throughout Dead Snow that ensures it is so entertaining despite treading such a well-worn genre.

Naturally the fun at the cabin involving booze, Twister and a close encounter in the outhouse is interrupted by a creepy old man who warns they are on an area used by the Nazis during the German occupation of Norway in World War II. For three years the Nazis murdered, raped and pillaged until a vengeful uprising by a merciless mob drove them out of Oksford and into the nearby mountains where they allegedly froze to death, never to be heard of again. The story doesn’t scare them, and neither does the discovery of a box of gold under the floorboards. The arrival of the Nazi zombies to take back the gold does, and that’s when the fun starts.

Wirkola starts the killing slowly by picking off a couple of students and seeing them barricade themselves in the cabin armed with only a shotgun, then he throws them to the wolves as they get armed up with an axe, chainsaws and a snowmobile-mounted machine gun to try to slice and headshot their way out of danger. Blood-sprayed faces and amputation is the result as they go through hell as the Nazis keep coming, and it’s with a wry smile that the swastika-wearing zombies are despatched. It’s not high brow entertainment, but it is done very well and if you’re a horror fan you’ll love the references.