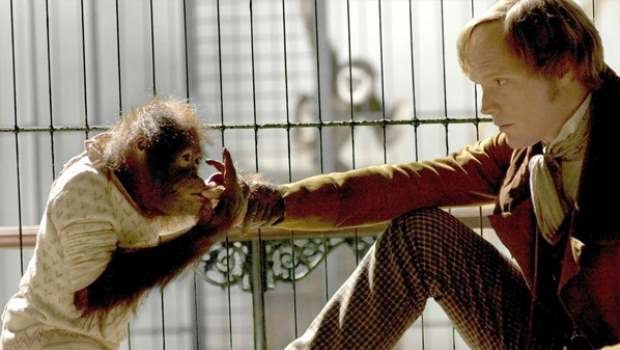 Summary: This is a gently lovely film, thoughtful, moving and timely.

Darwin. I don’t know about you, but my image of Darwin has always been jolly old chap with big beard and world-view-altering brain. I never thought about the fact that Darwin was once a young man, or that he was married, or had a personal life at all. Creation, based on the book Annie’s Box by Darwin’s great great grandson Randal Keynes, explores the lives of Emma (Connelly) and Charles (Bettany) Darwin as they struggle with his decision to write and publish On The Origin Of Species, following personal tragedy.

The film opens in 1859 with Darwin suffering some sort of brain fever; the death of his daughter Annie (West), five years earlier, for which he still blames himself, combined with the contradictory pressure of his desire to publish his theory and his awareness that he will be considered damned by all the world, including his own wife, have caused a complete physical and mental breakdown. Darwin is a great advocate of hydrotherapy and, after a visit from fellow naturalists Hooker (Cumberbatch) and Huxley (Jones), begging him to publish, and presenting him with the work of a rival naturalist, he begins to self medicate through the application of torturous cold showers. As he begins to work again, he argues through many of his theories with Annie, who frequently appears to him.

Charles’ work is a trouble to Emma; after the loss of Annie, he experienced a crisis of faith while she turned more deeply to God. This is in sharp contrast to the earlier scenes of their life together; the Darwins live in a rambling, untidy house with their eight children, an unusually close family, with Charles endlessly patient and willing to explain the natural world. Their close friend, the Reverend Innes (Northam), often comes over for picnics and lively debates. Darwin is particularly close to his daughter Annie , a bright and delightful child to whom he tells many stories of his youth. Thus we see in flashback his voyages on the Beagle and his work with baby orangutans which informed so much of his great theory.

Paul Bettany plays Darwin as a sensitive, tortured soul, suppressing his convictions out of loyalty and guilt. Bettany and Connolly, married in real life, are totally convincing as the Darwins, especially in the tender scenes of their reconciliation, but the star of the film is Martha West as Annie, totally convincing in her first role. (Honourable mention goes to the baby orangutan, which had me in tears.) Nature in all its beauty and cruelty, its blind inexorability, is shown – the baby bird falling from the nest, rotting to provide food for maggots and mushrooms, eventually returning to the soil. The death of a child is cruel, but not personal – but if the fittest survive, what is Darwin saying about his own daughter? As a chronic invalid himself, should he have dragged Annie across the country in order to be treated with freezing water, or trusted in conventional medicine?

This is a gently lovely film, thoughtful, moving and timely. It has now found US distribution, and I hope creationists watch it.