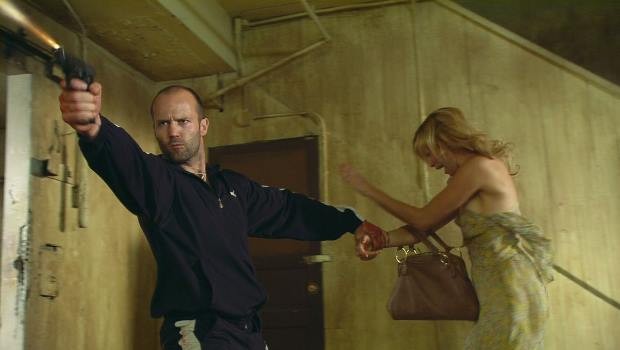 Summary: If you’re after an hour and a half of well-coordinated violence, you could do a lot worse than this.

Chev Chevlios (Jason Stratham) finds himself in a rather tricky situation – while he lay sleeping Ricky Verona (Jose Cantillo) crept into his flat and injected him with a deadly synthetic virus, a ploy which he later describes as being almost Shakespearean. He has a point, Will wasn’t adverse to a spot of poison from time to time, but don’t go to see Crank expecting another Buz Luhrman style reworking of the Bard.

The central premise to the film is that Chev can combat the effects of the virus by maintaining a high level of adrenalin in his body. Cue to spend an hour and a half doing things that are exciting such as car chases, fist fights, shoot outs and, most originally, having sex with your girlfriend in the middle of LA’s Chinatown district while a busload of schoolgirls cheer you on.

Perhaps the most telling about this film is the discussions that people are having about it on the Internet Movie Database site. In one of the forum’s attached to Crank’s entry someone began a thread as to whether there was any nudity involving Amy Smart, the actress who plays Chev’s girlfriend Eve. A number of people posted saying that they hoped this would be the case. Even when it was suggested that it would be a body double, someone called Fat_Big_Boy wasn’t put off, remarking that “hopfully female with big tits” would be used instead.

Yep, that’s the kind of mentality of people who’d like Crank have. If you are one of those people, I would warn you that there isn’t actually very much nudity (a couple of bosoms and a glimpse of Jason Stratham’s arse when he’s mucking about on a motorbike) involved in the film. There is plenty of action for you to enjoy, however, and it’s handled pretty well. Stratham has a decent presence on screen and it’s quite refreshing to see an English actor in the hero rather than the villain roles that are so often allotted to them.

There are a couple of cringe-worthy bits of dialogue when trying to make him sound very English, such as when calls someone a “plum”, a term which surely should only be uttered on the set of Only Fools and Horses. But it’s even worse when they try to make him sound like he grew next door to Ice T, i.e. at one point he complains about Verona having the audacity to “whack” him in his own “crib”.

The final scene of Crank is quite odd, with Stratham delivering an internal monologue that’s got more in common with American Beauty than the Terminator. Like the Shakespeare reference at the beginning of the film, it’s an attempt to make the film more than just another bog standard action film. Frankly, it doesn’t succeed in doing this, but if you’re after an hour and a half of well-coordinated violence, you could do a lot worse than this.