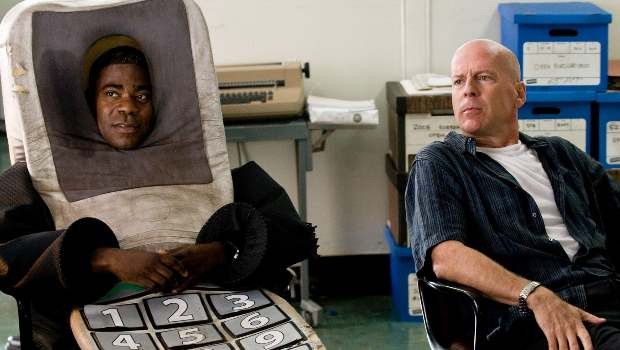 Kevin Smith’s slacker comedies Mallrats, Chasing Amy and Clerks helped him establish a fanbase who revelled in his quirky comedies and saw Jay and Silent Bob on their way to film fandom adoration. However his output of late has seen a decline in the sharp humour that once saw him get the best from Damon and Affleck in Dogma, as his film quality went downhill sharply with the ill-fated Jersey Girl and the disappointing Zack and Miri Make a Porno. For Cop Out he teams up with action hero Bruce Willis and Saturday Night Live’s Tracy Morgan for a comic buddy cop movie that tries hard to be hip and funny, but feels like the episode of a television series spun out to a feature film.

Cop Out sees police partners Jimmy Monroe (Willis) and Paul Hodges (Morgan) successfully crack a dealer to set up a bust that goes dramatically awry when Hodges, disguised as a giant mobile phone, gives away his position as lookout leading to a fall from grace that sees him and Monroe suspended from action for a month without pay. While Hodges has trust issues with his wife, Monroe is forced to sell his prized baseball trading card to fund his daughter’s wedding ahead of his ex-wife’s new partner’s offer of stepping in to cover costs. But when Monroe is tasered during a robbery of a collectables store in the middle of getting the much-needed $80,000 for a card he’s held on to since a child, the duo must go on a manhunt for the gangland boss obsessed with completing his own collection of baseball cards with Monroe’s most sentimental possession.

With Seann William Scott in tow as a lively robber to play off the double act of Willis in his typical good humoured cop role and Morgan doing his bit as a loud mouth partner, Cop Out has the ingredients for an amusing buddy cop movie with an off-beat story that gives plenty of ammunition for the actors to work with under the direction of Smith. It’s a shame their talents are largely wasted on a wafer thin plot that sees them hauled through a series of mishaps that never really develops any chemistry between the two leads. Willis has the look of a man going through the motions as a worn out enforcer while Morgan is all hot air as he tries to get laughs from his brash delivery. Smith, oddly skipping on writing duties for this production, struggles to stamp any kind of authority on the film as it becomes more akin to a generic television series. If that was the case, Cop Out would make for a good evening’s entertainment coupled with a few of your favourite shows. Sadly as a one-off there’s not enough time for Willis and Tracy to gel together and certainly a lack of weight to the story.

Cop Out feels like a pilot lost without 20 or so episodes to follow it up: the seeds are sewn for them to appear weekly on our small screens in crazy escapades and their real police work is over before it begins in an initial scene that suggests these are a crack duo who will put the bad guys behind bars by re-enacting famous scenes from Hollywood blockbusters. When they are forced to be normal guys off the beaten track immediately, you feel a little cheated. Still, Cop Out does its moments of comic genius, just not often enough to ensure Smith’s rare outing as solely the director is imbued with his usual brand of odd humour. A shame, as everyone involved tries so hard with the limited material and there’s mileage in the Willis/Morgan partnership that could have been exploited.