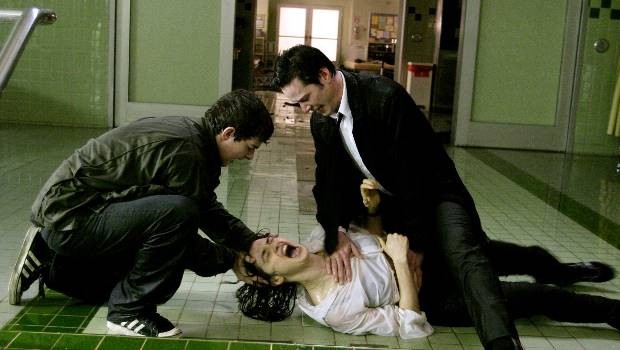 Summary: If you’re not a diehard fan of the Hellblazer comics it is well worth seeing.

Comic book adaptations have had a bit of a mixed run of late. In the late 90s Joel Schumacher’s Batman and Robin had buried any respect for superhero flicks and its memory had been hanging around the studios like some rotting corpse in a rusty gibbet, swinging from the city walls of Hollywood as a warning to all filmmakers of what could happen if a lot of money is invested in a project with no thought or care. Then the arrival of Blade in 1998 set in motion a chain reaction; a run of hugely successful comic book adaptations made by filmmakers who learned not to mess with the source material. In particular, both Spider-Man and X Men movies set the benchmark for superhero films.

The films that proved not so successful have been the ones adapted from the less well-known comics. Taken it itself, From Hell was a pretty efficient whodunit, but it completely failed to capture the complex, multi-layered narrative of Alan Moore’s source comic. Moore’s League Of Extraordinary Gentlemen was similarly stripped of its intelligent charm and was, frankly, dreadful. More recently, Ang Lee’s Hulk seemed to divide both audiences and critics alike, The Punisher failed to convince and it was down to Hellboy to salvage some credibility back into the genre. So where does that leave Constantine?

The character of John Constantine is taken from the DC Vertigo Hellblazer series of comics and first appeared in 1985, gracing the pages of the Saga of Swamp Thing by Alan Moore (he does get around). Born with a gift he didn’t want, the ability to clearly recognise the half-breed angels and demons that walk amongst us unsuspecting mortals disguised in human skin, Constantine was driven to take his own life to escape the torment that this ability caused him. But he failed. Resuscitated against his will, he found himself back in the land of the living, condemned due to his attempted suicide to patrol the borders of heaven and hell, using his unique ability to help others.

The great thing about Constantine is that he is a true antihero. With a shock of blonde hair, dry cockney wit and never without a fag stuck to his lips the character makes for great reading. Disillusioned by the world he will fight to save your soul but he doesn’t want your thanks; he just wants out. So purists of the source comic will automatically have their noses put our of joint by the fact that dark-haired Canadian Keanu Reeves has taken the role and the action of the film has been lifted from London and transplanted to Los Angeles. Also gone are the wisecracks; instead Reeves plays Constantine with a heavy heart. As in the comic Constantine is a chain smoker, but this version of the character seems to be bordering on clinical depressive. Only the occasional deadpan one liner leaks out every now and again.

Aside from these changes, and given that about 99% or the cinema-going public won’t have read the comic, how does the film play? Well, large parts of it are great. Shot in muted colours, director Francis Lawrence has created a suitably brooding, atmospheric-looking thriller that paces itself well. Constantine is enlisted to help a sceptical police detective, played with conviction by Rachel Weisz, to solve the mysterious death of her twin sister, a quest that will take both of them to hell and back and will involve the angel Gabriel (an androgynous Tilda Swinton) and Lucifer himself, who in this film takes the form of Coen brothers’ favourite Peter Stormare and who thoroughly enjoys the part – and may be the best thing in it!

The film is however pretty uneven. Simply put, while large chunks of it are really dark and exciting, there are moments that are pretty bad. The script is pretty hokey in places and the demons range from scary to cheesy and unoriginal. Plus, Constantine has a pretty annoying and totally unnecessary sidekick and Gavin Rossdale, who hams it up as demon Balthasar and is lead singer with average rock band Bush, should really stick to his day job making average music.

I should come clean now and admit that I really am not a fan of Keanu Reeves and do not think he is a good actor in any way, shape or form; he even made Kung Fu look unconvincing in The Matrix. In Constantine however, I found him give his most watchable performance since Bill and Ted, but every now and again his usual slightly disabled tone and awkward mannerisms rear their ugly head.

That said, if you’re not a diehard fan of the Hellblazer comics it is well worth seeing. And judging by the success of The Matrix, most people don’t have the same problem with Reeves as I do so it’s obviously my problem and I’ll deal with it in my own way. At the end of the day there have been better comic book films than this, but there have been more made that are far, far worse. Constantine looks great, has some cool moments and is a pretty good set up for what could be a franchise that has potential to get better and better.