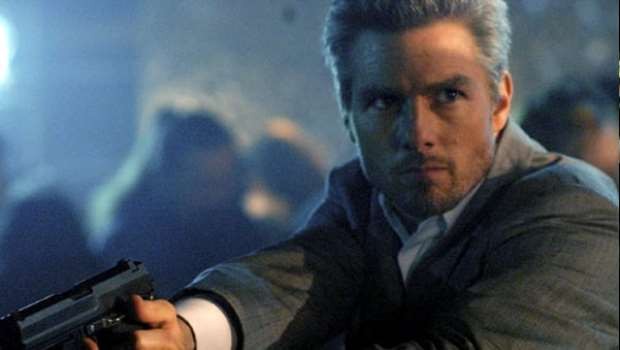 Summary: As clean and contemporary as a high budget thriller could possibly be.

King of the urban thriller, Michael Mann, adds a stylish new title to the cannon with Collateral, a return to what he knows best after the disappointing biopic Ali.

Taking place over one barmy California night, Collateral takes in the bright, built up sprawl of downtown Los Angeles and sets it up as the perfect place for the corpses to start piling up. Tom Cruise (elegantly coiffured with grey highlights) is the shadowy, business-like Vincent, a hitman in town with a few hours to kill. High on charisma and low on morality, he’s got a shortlist of key witnesses that need to be taken out before his dawn seat on the red-eye, and what better way to do the rounds than in the back of a cab: cheap, efficient, anonymous… these could be the watchwords that Vincent swears by. Hiring long-suffering cabbie Max outside the airport, Vincent offers him a tidy sum to be driven from place to place so that he can complete a number of “real estate deals”. Only when the corpse of the first name of the list falls out of an apartment block window onto the unsuspecting Max’s cab does the realisation that he’s picked up one tough negotiator start to hit home.

Collateral is an edgy, superior thriller much in the same vein as one of the director’s earlier incarnations in the genre: Heat. A ruthlessly efficient story allows for Mann to bring all of his customary slickness to bear upon the setting and the characters. Again, Mann powers the narrative through the central exchanges between two very different men, who struggle for meaning in the blinding neon metropolis. When Cruise’s magnetic Vincent tries to convince Max that his actions grow out of circumstance and necessity you almost start to believe him, and of course although he’s playing the bad guy an audience can never be made to root against Tom Cruise. He turns his job into an artform, bursting into acts of extreme violence in the blink of an eye, he looks cool in a suit and the grey hair kinda suits him. Jamie Foxx is effective as his unsuspecting chauffeur, but he doesn’t have much room to manoeuvre in Cruise’s doughty shadow.

The action sequences are excellently choreographed, stripping everything back with refreshing confidence to men shooting guns with plenty of muzzle flash but it’s in the mood and the tension where Collateral really impresses; some of the finest moments in the film are conversations. The city of lights is shown as unusually sparse and beautiful; wide deserted boulevards and clean concrete surfaces buzz with reflected light.

Collateral re-uses a familiar template and injects it with a recognisable visual style that will be greatly appealing to fans of the genre. It doesn’t break new ground, but it represents a return to form for a director revelling in the material that his vision is most akin to. It’s as clean and contemporary as a high budget thriller could possibly be.