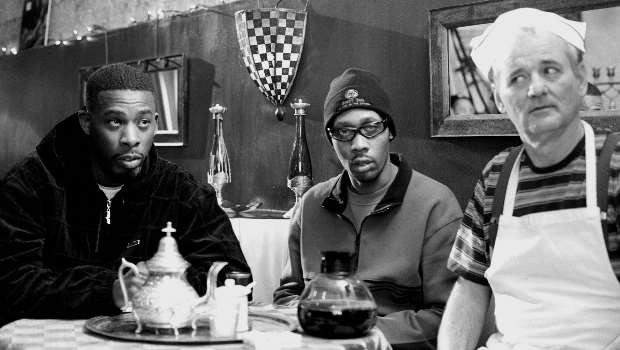 Summary: Coffee and Cigarettes is one hip slice of movie minimalism that’ll raise more than the odd talking point.

How much time do you devote to your daily addictions? How long do you spend sitting around shooting the breeze? How often do you combine the two? This interrogation is not designed to render purpose to your scatological existence, but if the answers are “lots”, “too long” and “yes, all the time”, then you’ll probably enjoy “Coffee and Cigarettes”; an entertaining ninety minutes of nothing but sipping, smoking and talking, pieced together by Jim Jarmusch

Comprising a series of eleven short sketches, the set up in Coffee and Cigarettes is refreshingly unfettered as people sit around improvising conversation in smoky rooms over a cup or two of steaming, hot Joe. It’s really as simple as that. The discussions are as wide-ranging and varied as life itself, from Jack and Meg from The White Stripes discussing electrical superconductors to RZA and GZA from the Wu Tang Clan musing over the beneficial qualities of herbal tea! The chat is at times unexpected, and never anything less than entertaining.

Jarmusch brings together many of his usual collaborators, and some new faces, to complete a rich tapestry that has been slowly woven together over the past 17 years. The first vignette, starring Roberto Begnini and Steven Wright was shot in 1987 and the edgy, self-effacing encounter between Iggy Pop and Tom Waits dates back to 1992. These early forays into observational realism set the template for the segments to come. Stark black and white photography coupled with a pared down aesthetic allows the banter to flow unhindered. I mean who needs flashy photography and camera angles when good old plain conversation is so watchable? Jarmusch remains true to his minimalist, indie roots throughout, allowing Coffee and Cigarettes to slot comfortably into his canon of work, as something of a quirky footnote.

The most memorable sketch is also the most satirical, in a meeting between Brits abroad Alfred Molina (Doc Oc in Spiderman 2) and Steve Coogan, the dark heart of the fame game is laid bare for all to see. Coogan hilariously scrambles for a leg up in the business once he realises Molina is more connected than he first thought. It’s the stand out moment in Coffee and Cigarettes, and apparently solidifies the fiercely-independent Jarmusch’s own outlook on mainstream American cinema. Looking at it another way, Coffee and Cigarettes is something of a Jarmusch retrospective, a cinematic greatest hits that encapsulates the styles and themes that he has bookmarked throughout his career. Other iconic faces to look out for include Bill Murray (in a chef’s hat), Steve Buscemi as a waiter and Cate Blanchett playing herself and her long lost Aussie cousin both at the same time. Fame, fortune, celebrity, philosophy, electricity… it’s all stirred into a super-cool mix that keeps the viewer buzzing throughout. Coffee and Cigarettes is one hip slice of movie minimalism that’ll raise more than the odd talking point.