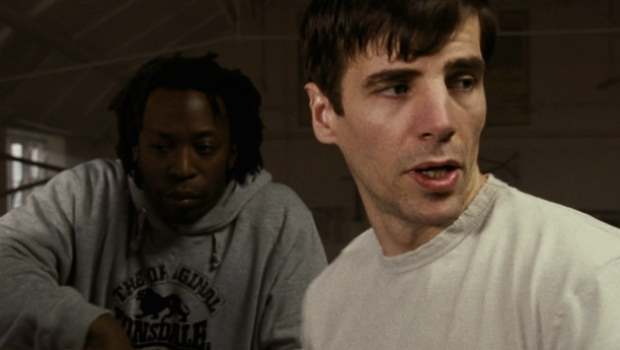 Summary: Clubbed breaks the first rule of filmmaking with a voiceover that repeats ‘let me tell you’, and its all downhill from there.

Clubbed opens well, with Chic’s classic Good Times bouncing along with the credits and setting you up for a feel good, last days of disco style romp through the 80s that sadly never materialises. The story of Danny (Raido), a cowed and fearful factory worker in a drab midlands town, Clubbed is a morally dubious tale of empowerment through vengeance, which suffers from a confusing timeline and dodgy script.

Danny is newly divorced, with two little girls whom he adores. In every other aspect his life is a failure. His ex-wife (Peake)despises him, his colleagues ignore him, and he is regularly beaten up – in front of his two little girls – by a gang of local thugs. Depression, we are told, has Danny in its thrall, and he lives with fear as a constant companion – until he meets Louis (Salmon), a local nightclub bouncer. Louis takes Danny under his wing, teaches him to box, and lends him a copy of The Art of War. A few weeks later and Danny is bristling with self-confidence; he’s even capable of working a few shifts at the club and suddenly his life seems to be turning around.

Much is made in the film of the camaraderie of men – Louis comes with a posse that includes Rob (Parkes), a cool young man with a troubled past, and Sparky (Williams) who, with a baby on its way, is out to make as much money as he can. As part of this group, Danny finds the strength he lacks and there are lots of locker room scenes and amiable bantering. Sparky is playing his own game; allowing dealers into the club against Louis’ orders, he then graduates to acting as a courier for local king pin Hennessy (Fox), to his girlfriend’s (Aicha Mackenzie) displeasure. Sparky’s activities bring Rob, fiercely anti-drugs, into direct conflict with Hennessy, and the tension escalates, to the ruin of all.

Clubbed breaks the first rule of filmmaking with a voiceover that repeats ‘let me tell you’, and its all downhill from there. The biggest problem is Mel Raido’s performance as Danny; when his ex-wife tells him that she can’t trust him, we’re forced to agree with her as he takes his daughters into one dangerous situation after another. Danny is one of those blokes who seems to attract violence and his hangdog demeanour, terrible poetry and sudden rages do little to get the audience on side. His sudden – and frankly unbelievable – transformation into cool dude about town is equally offputting. Suddenly he’s sporting Raybans and a pork pie hat, while the other bouncers, clad in a bizarre array of 80s clobber, look as if they’ve raided a dressing up box, and its all the more incongruous set against the drab backstreets of an anonymous midlands town. The story also jumps about alarmingly – one minute Sparky and his girlfriend are blissfully happy; next she is depressed and moving to her mother’s.

But more worrying is the idea that its essentially acceptable to batter someone to death as long as they are a bad person. In the current climate of gang violence and retribution, I’m not sure this is a message we want to pass on.