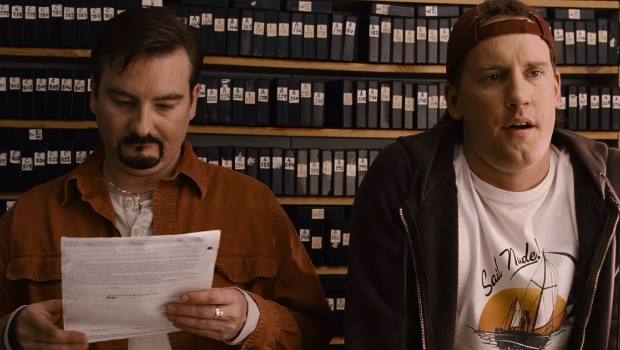 A long time ago, in Red Bank, New Jersey, a man and his friends made a little movie for less than $30,000. Somehow Harvey Weinstein of Miramax got to see it, and a legend was born. Clerks was a cult movie that made a star of its director Kevin Smith; a witty, cynical, and gut-achingly funny look at minimum wage service industry jobs that showcased his writing skills. It also introduced the world to Dante (O’Halloran) and Randal (Anderson) and, perhaps most memorably, Jay (Mewes) and Silent Bob (Smith himself), drug dealers extraordinaire.

Smith went on to direct other films, many starring the dynamic duo, with, some would say, diminishing returns. Fans watched the tapes of Clerks till they wore out and then bought the dvd. And wondered what happened to Dante and Randal.

And now we know!

They still live in Red Bank, but a tragic fire (caused, natch, by Randal) at the Quick Stop has forced them to go to work behind the counter at Mooby’s burger joint. They’ve even made some new friends. Dante is engaged to Emma Bunting (Schwalbach) and planning to move to Florida, where her parents are buying them a house and business. In the meantime he works at Moobys’ and watches Randall torment Elias (Ferhman), the born-again Christian, hobbit-loving junior, and gazes longingly at Becky (Dawson), Mooby’s manager.

There’s no point, with Clerks 2, in going into plot details. Just like the first film, in many ways it’s just a series of gags. See Randall mock Lord of the Rings fans! Laugh as Jay does Buffalo Bill! Cringe as Elias explains why he still hasn’t kissed his girlfriend! Guffaw as Randal upsets customer after customer with racial slurs! Cover your eyes at scenes of inter-species erotica!

So far, so expected. But what is totally expected – and where Smith is so very clever, almost despite himself – Clerks 2 is everything you want it to be, launching straight in with a discussion about whether its ever acceptable to go ass to mouth – is that Clerks 2 also a surprisingly touching story of male friendship. Randal needs Dante, he likes him and he loves him, as he says he’s the yin to his yang, and in a funny yet moving speech he begs him not to leave, as much for his sake as for Dante’s own. Dante’s fiancée, played by Smith’s own wife, is controlling and, frankly, quite weird looking – she also, at least in the film, has a very large clitoris, which bothers Randal; Rosario Dawson’s Becky, warm, beautiful, and sexually adventurous (ass to mouth is, sometimes, acceptable), is clearly Dante’s true match as Jay is Silent Bob’s. And she makes you believe that she would have sex with Brian O’Halloran. That’s acting.

I laughed and laughed and laughed at Clerks 2. If you liked Clerks, you’ll like this, and you’ll find yourself saying lines from it and listening to that song from the trailer, carefully applying Chapstick, wishing you were an astronaut so you could be the first to find an alien life form – and f*** it – and worrying about pussy trolls… Oh, stop reading this. Go and watch it. Go on. Just go.