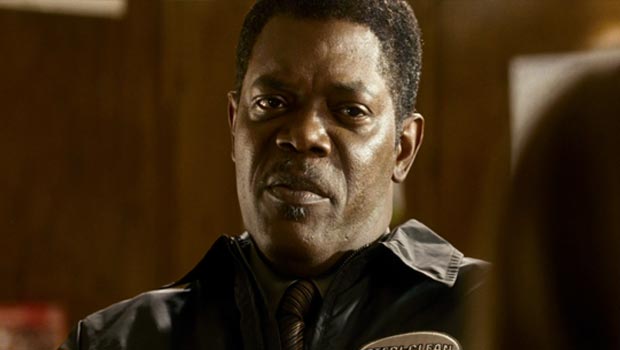 Summary: The final stand off is perfunctory at best, serving up some gun pointing just to signify there really were wrought emotions building up to the climax.

Famed for his fast-talking roles and a persona demanding respect, Samuel L. Jackson moves into the rare position as a framed victim for Cleaner. Playing murder scene cleaner Tom Cutler, an ex-cop now dealing with the dirty mess left behind at homicides, his smart delivery is quickly knocked out of him when a routine job in a luxury house implicates him in a crime. With problems at home for the single parent, Cutler’s sulking around for clues is full of desperation as his civilian status leaves few favours available. While this makes a change for Jackson, the outcome to this thriller is all too familiar.

Introduced via a humourous narrated lowdown on his job in a TV commercial style, Culter’s job is messy. He wipes blood off the floor, scrubs pearl white sofas until they are spotless and generally turns a gore-laden room into one as good as new. When he goes back to a job to return a key, he meets the homeowner owner Ann Norcut (Mendes) who has no knowledge of a murder in her house. Confused, the cop in Tom unearths the news that Ann’s husband has gone missing and beings to realise someone has set him up. He turns to his ex-partner on the force, Eddie Lorenzo (Harris), for help to clear his name and find out who the real murderer was.

Jackson seems a little uncomfortable being in the a leading role giving him restricted authority – Cutler never gets to put two fingers up at any figure in this movie. Lorenzo’s hands are largely tied by his continued police work while Norcut demands answers of why he lied about going to her house on a job. Together with serious parental issues as he struggles to provide his daughter Rose (Palmer), Cutler is a man scrabbling for answers. In the main, Cleaner follows a typical story arc of letting minor details leak into further minor details with the intention of keeping you hanging on for the full truth. Here, the links are all too obvious due to a lack of characters to spread the blame, making it largely an exercise in going through the paces of a generic man-battling-to-clear-his-name movie.

Director Renny Harlin, who’s work has varied from dumb blockbuster such as Cliffhanger to more recent duds The Exorcist: The Beginning and The Covenant, brings his shallow style which fails to add any tension despite the potentially dynamite pairing of Jackson with Ed Harris. The final stand off is perfunctory at best, serving up some gun pointing just to signify there really were wrought emotions building up to the climax. Jackson, Mendes and Harris do get the most out of Cleaner, yet, even with an intriguing tagline of “How do you prove you’re innocent of murder when you were the one who covered up the crime?”, it is just another average thriller.