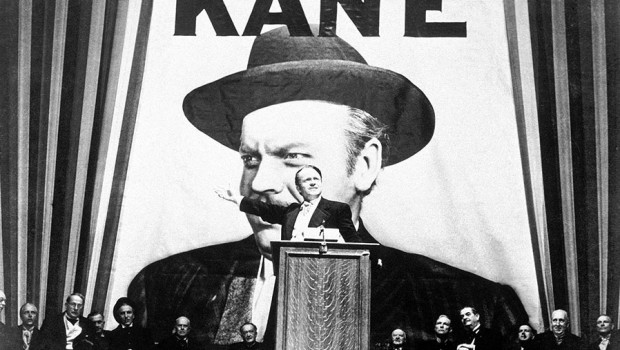 Summary: Unequalled in its inventiveness, its (for the time) originality and its overwhelming embrace and celebration of the possibilities inherent in film production.

Citizen Kane is probably the most famous film ever made. Throughout the past five decades, the debut of actor/writer/director/producer Orson Welles has consistently appeared in countless ‘Top Ten Films’ lists submitted by directors and critics alike. It undoubtedly features in every film studies course in every university throughout the world, and has received perhaps the highest of accolades- an entire episode of ‘The Simpsons’ devoted to satirising this landmark in cinematic history.

Citizen Kane is part investigative newspaper story, part jigsaw puzzle. It follows a journalist’s attempts to understand the meaning behind ‘Rosebud’ – the final word spoken by media mogul Charles Foster Kane (Welles). In the process, he speaks to those who knew, loved and hated Kane, piecing together their accounts to form an understanding of the man’s life. Citizen Kane is the study of one man, both a hero and a rogue, a principled egotist who wanted others to love him, but only on his terms.

For those of you who do not count Citizen Kane in your DVD collection, Universal Pictures Video are giving you the chance to rectify this situation on 21st July when they release the Citizen Kane Special Edition. This new DVD has been mastered from a newly-discovered 35mm finegrain interpositive, and the film and soundtrack have been individually cleaned i.e. it looks and sounds wicked good. For those of you unfamiliar with this alleged ‘classic’, however, the question still remains: is Citizen Kane all it’s cracked up to be and if so, does this DVD do it justice?

There is an argument, the case for which you do not hear very often, which states that Citizen Kane is actually a little, er… dull. It’s not a particularly exciting film, it’s not very funny or sad, it doesn’t really tackle any social or psychological issues to any great extent, and it is difficult to connect with any of the principle characters. In short, Citizen Kane may appear top of the list for intellectual film buffs, but how many people do you know who count it as being one of their favourite movies?

Of course, if popularity alone was a mark of how good a film was, then Titanic would be the best film ever made. Luckily (very luckily) this is not the case, which is why although Citizen Kane might not be the peoples’ choice, it still very much deserves its universal cinematic standing. This is because it is an example of an absolutely brilliantly made film, and one which in terms of direction, cinematography, set design and soundtrack is quite simply awe-inspiring.

When the sickeningly young Welles was offered a contract by RKO to make films, he somehow managed to wangle the perfect deal – no creative interference from management. Yet he had little or no idea how to actually make films, given that his previously highly successful career was based wholly on the stage and in radio. This creative control, coupled with technical inexperience, was an attractively heady mix as far as a certain Greg Toland was concerned. This incredibly able cinematographer, who had garnered awards for his work on The Grapes of Wrath and Wuthering Heights, was eager to work with someone who was willing to try something new. In Welles, Toland had found his man and in Citizen Kane his movie.

Adding to this frontier spirit, Welles was able to bring together other individuals willing to experiment in terms of sound, set and art direction. Rather than filling his film with named stars, Welles worked practically exclusively with members of his Mercury Theatre Company, actors who were used to radio and theatre, and who could use their voice as well as their face when it came to their craft. The young director was canny enough to employ Bernard Herrmann to write the film’s score (Herrmann went onto become the best film composer of his, or indeed of any other generation). In terms of the look of the film, art director Perry Ferguson formed the third part of the holy trinity along with Welles and Toland, and the efforts of these three men created a lighting style which makes the film a joy to watch (even with the sound off). In fact, it could even be argued that you could freeze every frame of the film and turn it into the kind of poster every self-respecting student would use to adorn their walls.

It is because of this collaborative effort, as well as Welles’s not inconsiderable talent in acting, producing and directing, that enables Citizen Kane to act as a masterclass in technical and original film production. It might not beat Star Wars in terms of people’s most viscerally enjoyable film, but it is virtually unequalled in its inventiveness, its (for the time) originality and its overwhelming embrace and celebration of the possibilities inherent in film production.

This Special Edition DVD was always going to do Citizen Kane justice because it guarantees that a technically brilliant film looks and sounds superb. And that’s pretty much enough for the price of the DVD alone. It’s therefore a bonus that Universal hasn’t scrimped on the, well, bonus features.

The DVD comes with two discs. The first has the normal main feature, scene selection and subtitles, as well as a really good audio commentary from film historian Ken Barnes. This man, as Alan Partridge would say, ‘really knows his onions’. His love and knowledge of the film shines through his commentary as he elaborates on the history behind the production of Citizen Kane, as well as helping to examine the impressive technical aspects of the film.

The second disc boasts a 50 minutes featurette, ‘Anatomy of A Classic’, presented by Barry Norman. The featurette is informative, but try not to watch it directly after watching the audio commentary, as they are very similar in terms of the information delivered – unsurprising, as both are written by Ken Barnes. Other bonus features include the original 1938 radio broadcast of The War Of The Worlds (which caused mass panic when thousands of gullible Yanks believed the play about little green men invading earth was a real on-the-spot news report), as well as a recording of The Happy Prince, featuring Bing Crosby.

For those suspicious minds who don’t believe the claims about the quality of the restoration, the DVD features a ‘before’ and ‘after’ comparison of the print, which really shows the difference. The breakdown of the cost of Citizen Kane is mildly diverting if you are into accounts, the photo gallery looks stylish and the cast and crew profiles are particularly informative. The best of the bonus features, however, is the film’s original theatrical trailer. Effortlessly amusing, the trailer has the audacity to not explain the film itself, but rather to concentrate on the different members of the Mercury troupe, all of whom were clearly dear to Orson’s heart. In fact, Welles doesn’t actually appear in the trailer, but does narrate it in his beautifully timbered voice.

The bonus features on the DVD are admirable, but if you are buying this Special Edition you should be doing so because it makes a great film look greater. It might not go straight to your heart, but Citizen Kane will go straight to your head, and by watching it you will not only be inspired by the film itself, but your entire knowledge and appreciation of the film making process will be all the more richer because of it.