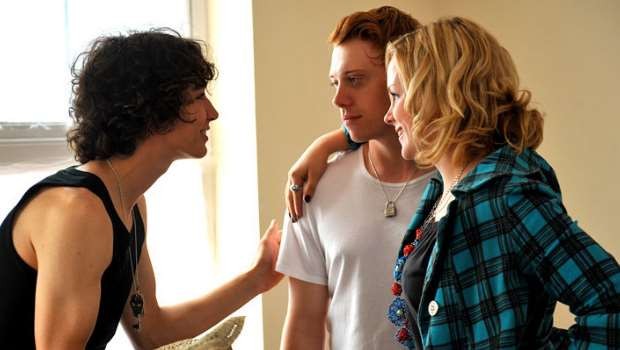 Summary: Cherrybomb’s got a sting in its tail you won’t forget.

The sight of Harry Potter’s chum Ron Weasley smoking, taking drugs and trying to get laid aren’t scenes from the latest film in the wizard franchise, but rather Rupert Grint making the transition from child actor to a more mature role ahead of his appearance in the last two Potter movies. It’s an astute move to give an alternative option for casting agents which sees him in a more adult role ahead of the famous series of Potter movies, and one that will appeal most to fans of the television series Skins.

In Cherrybomb Grint plays Malachy, a shy but enthusiastic teenager whose best friend Luke (Sheehan) is a bad influence. While Malachy is a model student and goes home to a loving family, Luke hates school and comes from a broken home where his brother deals drugs and his father offers little hope for the future. One summer in their hometown of Belfast, the 16-year-olds are in need of an outlet for their interest in the opposite sex. That girl just happens to be the same for both: willing vixen Michelle (Nixon) who seems set to play them off against each other for her own amusement.

Malachy comes into contact with Michelle through his part time job at a sports centre after being hired by her father, Crilly (Nesbitt) for the summer. Crilly’s a nasty piece of work but doesn’t see his daughter’s effect on the boys at first – or imagine what they might do to get her into bed. Michelle eggs them on to starting fights, spray graffiti, joyride and taking drugs in what starts as a fun way to spend the holidays but quickly becomes far darker and threatens to irreversibly damage their lives.

Though the increasingly seedy elements of Cherrybomb are almost inkeeping with the mindset of the youths, there’s a tendency to reach for the shock factor to ply a reaction from the audience as so often seen in Skins. The gritty camera work echoes its television counterpart too, making comparisons unavoidable. Thankfully the performances from the young members of the cast carry the movie, outshining Nesbitt’s over zealous angry Dad, and though we’ve seen boys jumping through hoops for girls before, Cherrybomb’s got a sting in its tail you won’t forget.