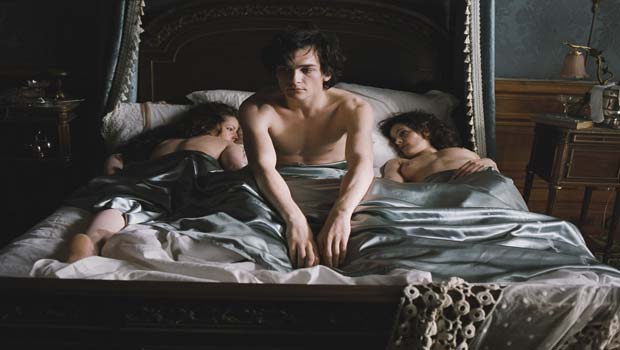 Summary: It's really hard to care about a bunch of unhappy rich people. If anything, we probably relish their unhappiness even as we envy their bedlinen.

Cheri is the story of Lea de Lonval (Pfeiffer), an aging but still beautiful courtesan in fin-de-siecle Paris. Relieved at being free from lovers, Lea is relishing her wealth and hard earned independence when she goes for lunch with an old friend, Madame Peloux (Bates), a fellow courtesan who has sadly lost her looks and figure and turned bitter with age. Mme Pelous is, unusually for a courtesan, the mother of a son: nineteen year old Fred (Friend), nicknamed Cheri by Lea. In common with many mothers, she is worried by the life of dissipated hedonism he is living and wants him to grow up; unusually, she sees Lea as the perfect mentor.

Cheri has clearly had a crush on Lea since forever and their relationship is one of idle sensuality. Cheri learns the ways of love, but not much else; unknown to Lea, his mother is arranging a marriage between her son and Edmee (Jones), daughter of another courtesan, Marie-Laure (Hjelje). Six years have taught Cheri nothing; he calmly imagines marriage to Edmee with Lea installed as his mistress and cannot understand why she is hurt that he didn’t tell her of the arrangement. Smarting, Lea knows that their time is over, and banishes him from her life. While he sets off on honeymoon with poor Edmee, Lea escapes to Biarritz, leading the demi-monde to believe that she has found a new lover.

Cheri, from Stephen Frears, who directed The Queen, and Christopher Hampton, who wrote Atonement – and who previously collaborated on Dangerous Liaisons, also starring the young Pfeiffer – is a crashing disappointment. It doesn’t even look very nice: Pfeiffer is deliberately shot to look older than she is and her costumes are shoddy; very little is made of Paris – the whole film is opulent interiors, like an ad for The White Company, nice bedlinen but not a lot else.

The heart of the problem is that the film has no heart. It’s rare for a film to look at aging, especially the aging of a once great beauty – Sunset Boulevard immediately comes to mind – and it seems to me that there might well be an interesting story in the tales of these courtesans. Like Edith Piaf, these were women who came from nothing, who grabbed opportunity where they saw it; fiercely ambitious, they made money by being demure; the contradictions are endless and their place in the world, tenuous indeed. But we get little of that here, or what is here must be dug out from between the lines. Mostly the film is about a tedious teenage boy – can you think of anything less alluring? – with a hole where his soul ought to be. Cheri is meant to be beautiful and fascinating but comes across as vacuous, selfish, and blank. He has no conversation, no interests, no hobbies; he’s sadly not even that pretty.

Collette’s novella is presumably to blame, but the filmmakers are still culpable, in that they have failed to tell an interesting story. Maybe it’s a sign of the times, but it’s really hard to care about a bunch of unhappy rich people. If anything, we probably relish their unhappiness even as we envy their bedlinen. And as for poor Lea, she doesn’t even get to have a story named after her, the heroine.