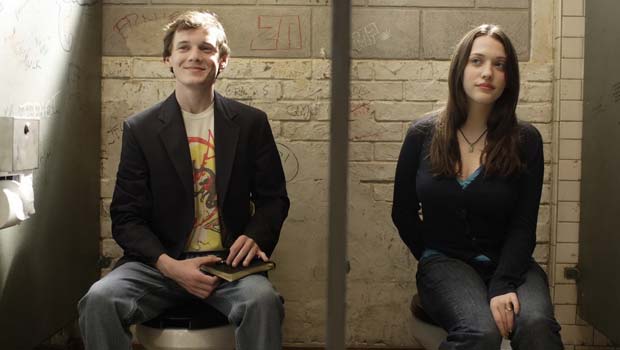 Summary: An offbeat teenage caper that may charm its way to a cult following.

Charlie Bartlett is a troubled teenager. A rich kid too smart for his own good, the honest-faced Charlie (newcomer Yelchin) has been thrown out of every private school his mother can find for him – the latest misdemeanour the selling of fake IDs to pupils. Now he’s going to a public school where his suit and tie attire is ill-fitting with corridors run by bullies looking for easy targets. What probably sounds like an obvious culture clash base for an angst-ridden story of high school life quickly takes a darkly comic turn as Charlie’s sessions on the couches of psychiatrists provide him with any prescription drug he can fake the symptoms of to peddle to fellow students with the help of bully-turned-business associate Murphey Bivens (Hilton). Soon he’s taking session in the boy’s restroom on a daily basis as a champion of the common room.

Charlie Bartlett fits perfectly into that American indie genre concerned with dysfunctional parents and their kids. Charlie can’t accept his father is in prison and prefers to pretend he is dead, while his mother (the brilliantly ditzy Hope Davis) drifts around in a daze. Even the principal of the school, Nathan Gardner (Downey Jr.), is an alcoholic single parent struggling to keep the respect of his pupil daughter Susan (Jennings) after his wife left him for another man. The only way this oddball bunch and those around them could possibly make sense of their lives is to find comfort in the strangest of places. Charlie becomes the prescription drugs godfather and counsellor to all, his amenable character well balanced to give advice, and acting as a central figure against Principal Gardner to the delight of Susan. The theory sometimes kids know better than parents isn’t original, but in Charlie Bartlett it’s the presentation that counts.

By making this movie quirky and tongue-in-cheek at times, editor-turned-director Poll could have lucked out due to Yelchin’s almost sickeningly smug Bartlett who talks in a know-all way that could have become about as appealing to listen to as a toddler who won’t stop whining for a McDonald’s. Fortunately, following a film-saving performance in Iron Man, Robert Downey Jr. is on top form as the disenchanted principal who struggles to keep control of his beloved Susan, let alone his school. Watching Downey Jr. act aloof, dejected or drunk is always a pleasure as he does it with a human touch no other actor can offer. Principal Gardner’s power struggle with a boy winning the heart and trust of his daughter is touching and comic in equal measure.

Other characters, such as Susan, Charlie’s mother Marilyn and Murphey are equally well played, if a little cliched, however there isn’t the same level of character depth seen in Wes Anderson’s high school offering Rushmore or the sheer playfulness of Ferris Bueller’s Day Off to really hold interest in the predictable closing stages. However, Charlie Barlett holds its own as an offbeat teenage caper that may charm its way to a cult following.