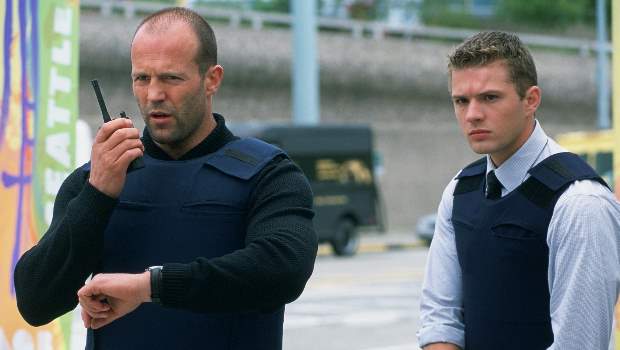 Summary: Chaos will live up to modest expectations even when the daft clues bound together by a beginner's guide to the chaos theory is used to fill in all the plot holes.

In a recent interview, Jason Statham said he played the roles he felt comfortable in, which explains why he is normally seen holding a gun or dishing out steely lines in his gruff voice as cops and hardened criminals. In short, he is always cast as a tough cookie because that is what he is best at portraying. In Chaos he follows this set pattern as the disgraced Detective Quentin Conners, suspended after shooting a hostage held at gunpoint. However, when bank heist mastermind Lorenz (Snipes) calls for Conners to negotiate with during a robbery loaded with hostages, the maverick veteran is re-instated to get the civilians out alive and bring Lorenz to justice.

Although the top line cast of Statham, Snipes and Ryan Phillippe as rookie cop Shane Dekker assigned to look after Conners might suggest a lot of effort has gone into making Chaos a serious bank heist thriller with a smart script, it’s really standard fare all the way to the final twists and turns. Lorenz and his goons breezily wander into the target bank, get surrounded by police thanks to a silent alarm and get the opportunity to set off a bomb when Conners leads a siege party up to the doors so they can all escape looking like the innocent bystanders fleeing from their captives. When no money is found missing from the bank’s safe, it’s up to Conners, Dekker and a pair of buxom female detectives (Waddell and Rollins) to use security footage to track down the villains, discover who Lorenz really is and find out why he was in the bank.

If you enjoy watching a bunch of cops standing around talking about clues, slowly reaching an action point and then breaking down a door into an apartment for a brief shoot out or chase sequence, Chaos is ideal entertainment. There are none of the criss-crossing relationships between those in power seen in The Inside Man or the intrigue into the bad guys seen in The Score – it’s a textbook heist thriller with enough gunshot wounds, smashed up cars and glaring between rival males to fill a Sunday afternoon. At least Statham is on typical form as his standard movie character, Phillippe sulks in the background until the final reel forces him to attempt to gain back some credible acting ability. Snipes, meanwhile, manages to inject some humour into Lorenz by the end with a comical hat, wide smile and jovial attitude giving his character a Dick Tracey-esque quality. Although together they are capable of so much more, they do enough to ensure Chaos will live up to modest expectations even when the daft clues bound together by a beginner’s guide to the chaos theory is used to fill in all the plot holes.