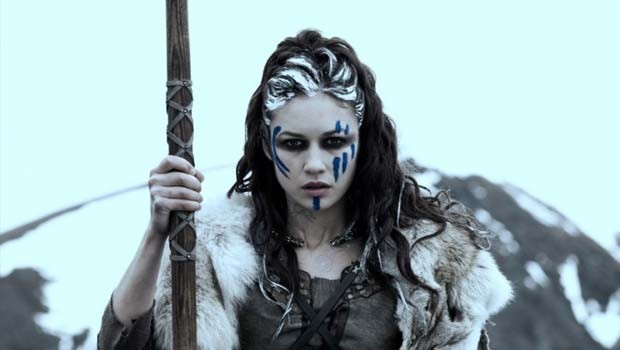 Summary: For sheer gore, fun and spectacle, Centurion knocks CGI fest Clash of the Titans into a cocked hat.

After the studio sponsored, enjoyably self-indulgent, futuristic mess that was Doomsday, Neil Marshall is back in indie territory with Centurion, which opens quietly and rapidly descends into carnage with a brutal fight scene. Marshall has never shied away from blood and here relishes the chance to up the gore factor in this retelling of the legendary “Lost Legion’, also the subject of Kevin Macdonald’s Eagle of the Ninth, which will be released later this year.

Michael Fassbender stars as Quintus Dias, an officer in the occupying Roman army, stationed on the Scottish borders. Under constant attack by Pictish guerrillas, the Romans have been forced into defensive positions, huddled in their forts. After one such attack, which begins with a spear through the groin – nice! – Quintus is captured by the Picts while the rest of the garrison are slaughtered. He manages to escape and makes it back to England and safety, where he joins the Ninth Legion under the command of General Virilus (West, channelling Oliver Reed). Quintus was probably hoping for a nice spa break in Aquae Sulis, but no such luck; the legion are dispatched back to Hibernia with orders to crush Pictish resistance once and for all. To assist them is Etain (Kurylenko), a Pictish guide who unfortunately can’t speak, as a result of having had her tongue cut out by Roman soldiers. Still, the commander of the garrison assures them that they can trust her with their lives.

Ruh roh! Naturally Etain has no love for the Romans, and once deep into Pict territory betrays them. With only a handful of men left, Quintus, as ranking officer, decides to try to rescue Virilus who has been taken by the Pictish leader Gorlacon (Thomsen); in the raid on the Pictish camp Golacon’s son is killed and Quintus and his merry men (who include David Morrissey, Noel Clarke, Liam Cunningham and Riz Ahmed) are soon (literally) running for their lives. pursued by Gorlacon who is, not unreasonably, bent on revenge. This allows Marshall to make fine use of the Scottish landscapes, enhanced with a little CGI, to create dramatic backdrops to the action. Indeed, with a nice use of pathetic fallacy, the landscape seems as hellbent on the Romans’ destruction as their human enemies.

Michael Fassbender is the big draw here; one of the most versatile (and sexy) actors working today, he brings a quiet vulnerability to the role of Quintus that nicely contrasts with West’s portrait of Virilus as hard-drinking, bombastic leader of men. Sadly, West’s role amounts to little more than a cameo, which is a shame because he brings a roustabout energy to his scenes. Marshall has cast a dream team of character actors and upcoming stars as supporting roles; the cameraderie and banter between the men is realistic, funny and rude. The least convincing bit of casting is Bond Girl Kurylenko; she’s the most credible Pictish warrior since Keira Knightley in King Arthur. Its also a shame that Marshall shoehorns in a romantic subplot as this signposts the plotline a little too obviously, and the third act is a bit rushed. But for sheer gore, fun and spectacle, Centurion knocks CGI fest Clash of the Titans into a cocked hat.