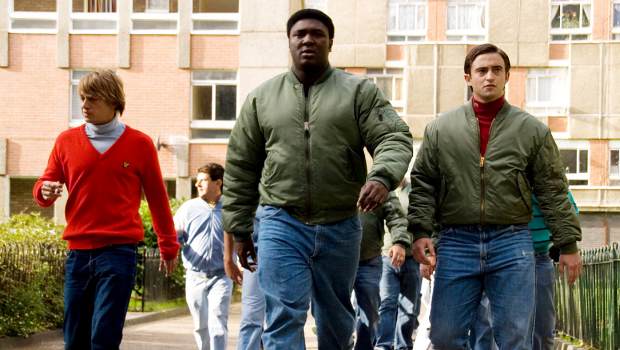 Summary: Cass is a slightly unsatisfying experience, though it has a cracking soundtrack.

Football hooligans seem to have captured the imagination of filmmakers and audiences – repellent yet weirdly compelling, so much at odds with the way most people choose to live their lives. Cass takes this one step further; it’s the true story of ‘Cass’ Pennant (Anozie), a black man brought up in a white world, who grew up to be head of the deeply racist Intercity Firm, and who left that world behind when his choices bought him to the brink.

Cass is adopted by Doll (Bassett – cruelly aged by makeup) and Cecil (Wight) who love him but cannot do anything about the deep scars caused by casual racism – when we first see baby Cass, a neighbour comments to Doll that he is still cute ‘before the big lips and curly hair’. We see a ten year old Cass trying to scrub the colour from his skin as a voiceover tells us that all he ever wanted was to be like everyone else. Doll desperately tries to reassure him that he is as good as everyone else, and luckily he has loyal friends, Prentice (Brocker) and Freeman (Gregory) who stick by him through thick and thin. The boys are all West Ham fans, and as teenagers get involved in the world of hooligans where, despite his skin colour, Cass is suddenly no longer just an anonymous a ‘nig-nog’. He is West Ham. Longing to fit in, Cass fails to see that hooliganism is a dead end; he just wants to belong.

As a young adult, Cass rises to become the leader of the The Intercity Firm, taking hooliganism to new heights of organization and terror, while working a mundane day job as a painter and decorator. The men live for the weekend, and refuse to see hooliganism as something wrong, even giving an interview in which Cass blames the media for fanning the flames of the phenomenon. Doll is horrified, but Cass is proud, and a few weeks later leads a particularly violent raid on a Newcastle pub. As a result Cass is imprisoned and shares a cell first with Zulu (Winston Ellis), a proud black man who sees Cass as an Uncle Tom, and then with Marlon (Robbie Gee), with whom he discusses his racial identity and the confusion of being brought up by a white woman, and Cass starts to write his story down.

When Cass is freed and meets Elaine (Press), he tries to go straight, but will he ever be able to cut the ties that bind him to the firm?

What is it about hooligans, really? Cass is actually much more interesting when it explores racial identity and growing up in the world before political correctness; as a black child growing up in the 70’s, I learned to ride on a pony called Nigger, and nobody, including my parents, seemed to register that there was anything wrong with that (the little pig bolted with me and broke my arm). But I at least had parents the same colour as me; Cass’ confusion is deepened by the fact that his parents are white. At Doll’s funeral the vicar (you have to wonder if he had ever met the family, or knew anything about them) doesn’t want to let Cass speak in the portion of the service for family members, and all through his childhood he is verbally and physically bullied. No wonder, then, that he becomes a bully; more exciting is that he used words to stop.

But is it a good film? It has a winning central performance from Anonzie backed up with fine support from Press and Bassett as the women in his life but much of the violence is dull and incomprehensible; Cass’ unwillingness to distance himself from his old life frustrating.; the whole film unfocused and slightly sluggish, despite the subject matter. And why does Leo Gregory keep taking these roles? In the end Cass is a slightly unsatisfying experience, though it has a cracking soundtrack.