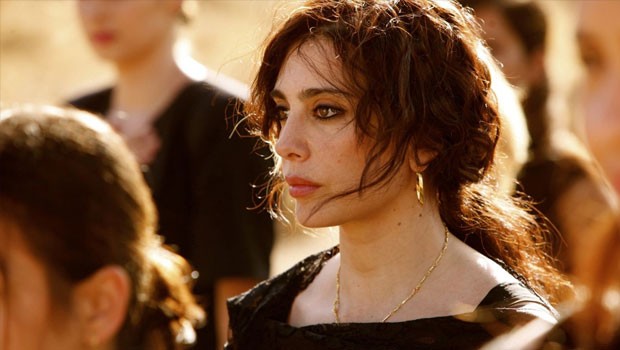 It’s refreshing to watch a film about the Middle East that doesn’t feature bombs, American soldiers and tanks.

Layale (Labaki, acting as well as filling the director’s chair) is the owner of a beauty salon and the mistress of a married man. Seemingly independent, at least in her day job, she is also a good Christian girl who lives at home with her parents and spends her days waiting for the phone to ring. Her salon is a home-away-from-home for a number of women: Rima (Mourkazel), her quiet, boyish assistant; Nisrine (Al Masri), engaged to be married and burdened with a secret; Jamale (Aouad), an aging actress, clinging onto her youth and sensuality with both hands; and Rose (Haddad), the seamstress, who has sacrificed her personal happiness in order to take care of her sister.

In terms of the story, that’s about it really, and yet the film says an incredible amount about these women’s lives; Beirut seems comparatively modern, and indeed looks a lot like any other Mediterranean city; the women wear skimpy modern clothes and make up, and seem fully Westernised, yet they are constrained in ways that few Western girls can imagine. Layale cannot book a hotel room for herself and her lover, as her ID would prove that she isn’t married. Nisrine spends the night in the police station after she and her fiancé are arrested for talking in their car outside her parents’ apartment, and she is terrified that he will realised that she is not a virgin on their wedding night.

Caramel is Nadine Labaki’s directorial debut and she has created a window into a world at once as exotic and as believable as any effects-led summer blockbuster. Caramel features a group of women torn between their upbringing and their desires; like women the world over they suffer endless guilt and the salon is the one place where they can go to be themselves. As they sit with bleach on their mustaches, they can relax, talk, share their problems and find collective solutions – or simply comfort and support. It’s also relatively rare to see women’s friendships depicted like this – women are so often shown as jealous, spiteful, or simply catty in their relationships, and women are also so often their own worst enemies, as anyone who has seen this series of The Apprentice can attest.

The ensemble cast are fantastic and, impressively, are mostly non-actors, picked because they are like the characters they play. Particularly wonderful is Aziza Seman, who plays Lily, Rose’s slightly dotty older sister, and has a ball doing so. Though the film focuses on its female characters, there are also gentle depictions of men – the policeman who adores Layale from afar; Charles, the widower who quietly, sweetly falls in love with Rose; Nisrine’s affectionate fiancé. But in the end the film comes back to the women because it is their story that its telling, and Caramel (the sugar used in the Middle East instead of wax to remove hair) represents that story – sour and sugary, sweet and painful: Caramel is poignant, tender, and delightful.