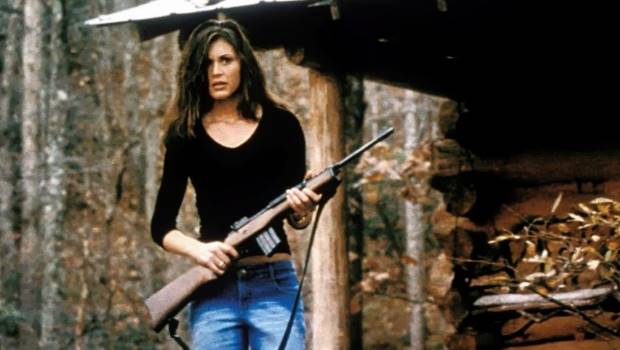 Cabin Fever, by producer/director Eli Roth, is a funny film that was obviously quite enjoyable to make. Its only problem is that it is supposed to be for horror fans, but isn’t actually that frightening. Gory it may be, but scary it is not.

The main reason why Cabin Fever is funny in parts but not particularly fear-inducing in others is because it’s not really sure what it wants to be. Roth throws a variety of elements into the mix with a certain joyous abandon, but he works better when he has fun with the genres he is plundering than when he tries to use them for serious intent.

Cabin Fever follows a group of students (or, if you’d, like cheap actors) as they mark the end of their exams by taking a well-deserved mini-break. Not, as you might expect, to somewhere warm and populated. No, these crazy kids, who have clearly never been to the movies in their lives, decide to spend a relaxing couple of days in a cabin, in the middle of the woods, in nowheresville America. If this group of dumb Yanks were not already aware of the inherent dangers of such an enterprise, then they really should have realised their plan was a little foolish when they stop off to get supplies and one of the group gets bitten by a harmless looking child. And is then blamed by the child’s redneck father for getting bitten. Whose own kindly-looking father refers to black people as ‘niggers’.

Despite the fact that their surroundings are essentially shouting, ‘squeal little piggy, squeal!’, this bumbling group of idiots think nothing of the incident and carry on regardless to the cabin of their dreams, which looks like every wooden structure used in every horror film ever. But a little less inviting. To begin with, everything goes smoothly. Two of the group have rampant sex, thereby allowing the token glamour actress to exhibit the amount of money she spent getting her tits done, whilst, bizarrely enough, shoving her finger up her boyfriend’s ass. The other potential couple in the group would have sex if it was up to the boy, but instead they just have a quick pet on a raft in the middle of the lake that they have somehow managed to reach (clearly they are Olympic swimmers). The final member of the group decides to shoot squirrels, ‘because they’re gay’. (When challenged on his homophobia, he says, ‘C’mon – I don’t care if they’re gay or straight. I’ll shoot them anyway!’.)

Problems arise when the squirrel-destroyer accidentally shoots a man whom he understandably mistakes for a squirrel. To make matters worse, the man seems to be suffering from a rather unfortunate disease. It doesn’t turn him into a murderous ball of rage as you might expect from a horror film, but it does have the unpleasant by-product of making him bruise like a peach until his skin falls off quicker than Jordan’s brassiere.

Instead of heading back to the cabin, rounding up his friends and suggest that maybe they’d like to leave the woods, numb nuts decides to head back to the cabin as if nothing has happened. That night he looks genuinely surprised when the man he shot earlier, who could really do with some skin cream, turns up at the cabin and asks for some help. Again, rather making a sensible decision, the students, who must attend the worst academic institution in the world, decide to make flaky-skin-man’s life easier by beating the living crap out of him. Whilst he is sitting in their car. The man returns their kindness by puking up blood. So the kids set fire to him and happily watch him scream like a banshee and hotfoot it through the forest, as he suffers the double blow of hot and flaky skin.

Here on in, things take a turn for the worse. Not only do the kids feel a tad guilty for burning alive the poor shmuck, but also the damage they have caused to their car’s bodywork somehow stops it from working. Oh, and the guy who they burnt handily made it to the local reservoir, thereby infecting the local water supply. But the kids don’t know this. So they drink the water. And one by one, they each get infected.

This infection is Roth’s greatest strength and biggest downfall. It does lead to some pretty gruesome scenes, the standout being when one of the boys finally gets his wicked way with the girl of his dreams and reaches third base, only to find that she is suffering from what looks like the heaviest period in the world. But when the kids get infected, nothing really happens. They don’t go berserk and try and kill each other in a variety of ingenious ways. They just find that their skin comes off and they start puking blood. Which causes Cabin Fever to be no scarier than an episode of Casualty with a bigger special effects budget than usual.

When the locals, led by the father of the hand-biting boy, realise something has gone awry in the woods, they decide to display some regional hospitality and kindness to the kids by hunting them down like dogs. Unfortunately, Roth’s foray into Deliverance territory is his second greatest strength but again his second biggest downfall. Roth’s homicidal rednecks are undoubtedly amusing – the hand-biting (and as it turns out) kung-fu fighting kid; a very large but soft-in-the- head yokel who does nothing but carry a small wooden box; and, best of all, a young party-loving deputy whose ability to do his job is as inept as the bum-fluff he calls a moustache – but they are about as frightening as Grandma Walton.

The fact that Roth hadn’t really decided what film he wanted to make before he started rolling, does give Cabin Fever a funky guerrilla film-making feel and allows for some pretty whacky scenes (such as when the glamour girl, dressed up to the nines, leaves the cabin claiming she is going to get help and is next seen gliding serenely across a lake in a large Indian canoe). Roth should also be commended for making a film that doesn’t take itself too seriously. Yet by the same token this causes Cabin Fever to become too loose and unfocused, unsure of itself and what it really wants to be. Any tension that does manage to get created along the way is completely lost in an interminable ending which lays bare Cabin Fever’s lack of structure and cohesion.

The fact that Cabin Fever winds down with one of the funniest stand-out scenes to reach our screens in the past couple of years is potentially worth the price of a ticket stub alone, but horror aficionados might leave cinemas disappointed. It’ll be interesting to see what Roth comes up with next, but in the meantime, you can probably save save your dosh and rent the DVD for a schlock-horror night in, maybe as a nice antidote to the much better-made but slightly less-fun 28 Days Later.