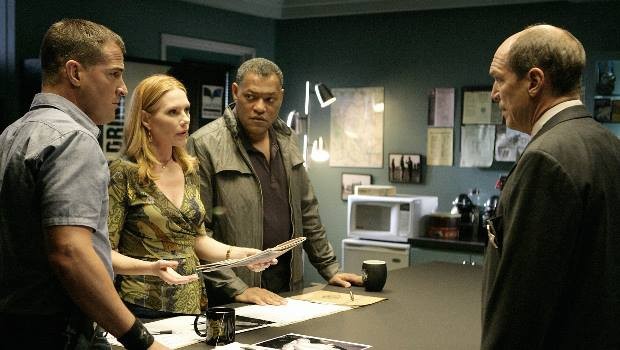 Summary: Season 10 feels a lot fresher with the new face in Fishburne but its odd to see the others playing second fiddle to his on-screen presence.

The tenth season of Crime Scene Investigation sees Laurence Fishburne fully integrated into the CSI set up in Las Vegas as Dr. Ray Langston following the departure of William Petersen (Dr. Gilbert “Gil” Grissom). The man made famous by The Matrix movies is given a full welcome thanks to a bullet time sequence inspired by the sci-fi trilogy opening the first episode. It’s a grand gesture that cost around $400,000 to produce and sets off season 10 of the series in style. All eyes are on Fishburne taking the lead as he initially came on board as a rookie CSI who rises quickly through the ranks and while he has the same air of authority he had as Morpheus, there’s also a suggestion that his promotion to leading the Las Vegas team and the need to get the most from the famous actor requires a little too much attention to focus on his character over any other.

The bullet time sequence that starts the series depicts an attack on the CSI lab. Bullets and the ripples tracing their path through the air fill the screen as the characters are seen in various states of combat, then the episode jumps back 48 hours to reveal how the shoot-out came about. It proves to be the start of the story arc which will last though the season as Ray investigates the disturbing work of “Dr. Jekyll”. The Dr. Jekyll episodes provide insights into Ray’s background, questioning his integrity in a bid to make him a more interesting character, however outside of these episodes Langston spends much of his time relaying what he thinks in quotable phrases that sound ponderous but don’t always mean much related to the action. On one investigation he quotes: “Sometimes when God opens a door, Satan opens a window” as though he’s Morpheus rather than Dr. Langston, which places him on a pedestal above the rest of the team: he’s like the wisened sage dishing out the metaphorical advice to others.

Except he’s actually the newest member of the CSI team and, certainly in the eyes of the regular viewers, might be seen as getting all the kudos as team leader just because Fishburne is a famous Hollywood actor. The series features the same mix of murder and intrigue among the strip clubs, bars and casinos of Las Vegas for as much glitz as it can muster between the more downtown cases, and the cast are as au fait with the modern technology needed to track down killers based on the evidence at the crime scene as ever. Season 10 feels a lot fresher with the new face in Fishburne but its odd to see the others playing second fiddle to his on-screen presence. This lack of focus on the mainstays will hopefully be rectified in the 11th season as Fishburne starts to overshadow the series far more than Petersen ever did.