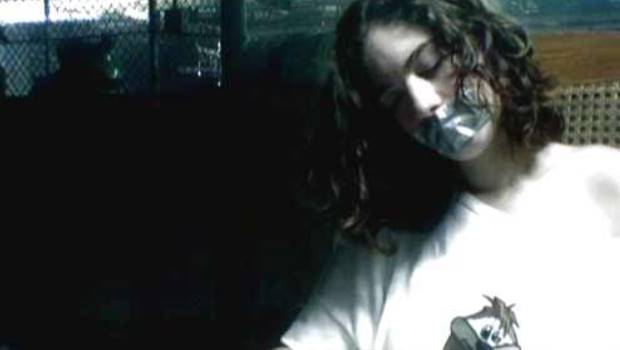 Summary: Broken is an intriguing and hugely entertaining concoction that could benefit greatly from an extended running time.

Produced for only $8000, Broken is an inventive and action packed short film directed, produced and edited by Alex Ferrari and co-written by Ferrari and Jorge F. Rodriguez.

An arresting prologue sees a young woman (Samantha Jane Polay) wake suddenly from a bad dream. Scrambling for her pills, she heads to the kitchen, only to be confronted by a shadowy figure in the corner. A couple of thumps later and she’s bound and gagged and waking up in a wheelchair in a dank basement, surrounded by an assortment of armed heavies. She’s taunted by a scarred man who tells her he’s going to kill her. Meanwhile a masked gunman is making his way towards the scene, but is he coming to help Bonnie or not? And just what is the secret of her blue eyes? 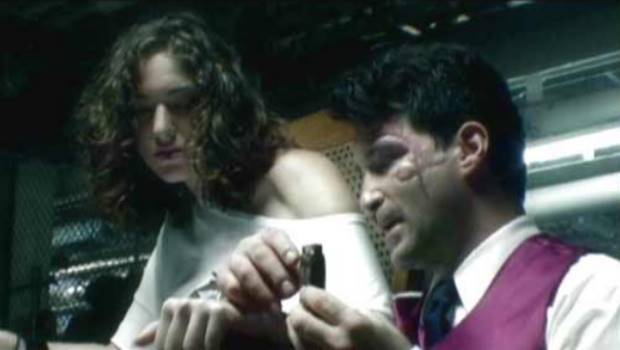 Not that we ever get to find out mind you because, with a running time of just 17 minutes, the biggest problem faced by Broken is trying to cram everything in. There just isn’t room for anything approaching character or plot development – we have no idea who these people are or why they are there, and there is never any attempt at filling in the blanks. This would appear to be Ferrari’s intention however, and where it does succeed is both on the level of a Hitchcockian nightmare, where an unwitting protagonist is thrust into an uncontrollable situation with no motive or explanation and, vitally, as a cracking action set piece.

Tension is built nicely for the first 10 minutes or so and suddenly the lack of backstory becomes an advantage as, with no knowledge of the characters or their behaviour, absolutely anything could happen next. When the shooting starts the film comes into its own and we’re treated to some expertly choreographed action, as well as a few excellent make up effects.

Technically, Broken is very impressive. One of the key factors contributing to its quality is undoubtedly the editing, which is fluid and controlled. Likewise the photography is gloomily atmospheric. Ferrari’s background in post production has stood him in good stead, with sound design and effects editing of a very high order. The acting, it has to be said, is somewhat less than brilliant, with the exception of Paul Gordon who is really rather good as Bonnie’s mysterious tormentor, his quiet methodical approach and easy going menace recalling Zed in Pulp Fiction. Based purely on physical resemblance, you get the impression that if more money were available the pair would be played by Selma Blair and Anthony La Paglia.

Broken is an intriguing and hugely entertaining concoction that could benefit greatly from an extended running time. As a segment of a much lengthier piece, it could prove to be a tightly effective little sequence. On its own it remains an empty but enigmatic showcase of Ferrari’s talent.