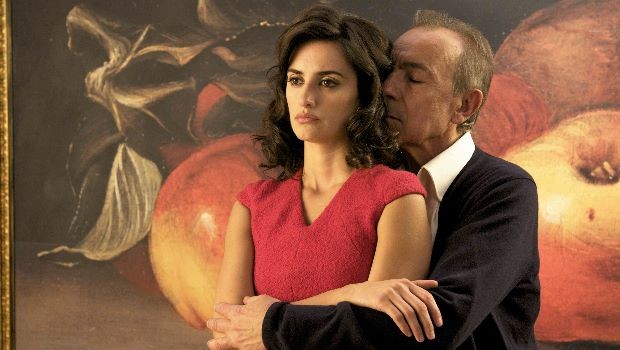 Summary: The film is perhaps not as deeply felt as Volver, but it is a subtle, glorious and enjoyable film nonetheless.

Penélope Cruz is a strange creature. Acting in English, she is supremely irritating and comes with a load of baggage – from being Tom Cruise’s girlfriend to the lisping L’oreal ads. But in Spanish she’s a different – and better – creature altogether, and with Almodovar she is a throwback to the great vamps and femme fatales of the 50s and 60s. He knowingly plays on this; in one scene she wears a Monroe wig, in another she is the spitting image of Audrey Hepburn. And indeed Broken Embraces is a film above all about filmmaking, a deliberate and knowingly Hitchcockian thriller crossed with a Douglas Sirk melodrama.

In the present day, a man named Harry Caine tells a story to a young man named Diego (Novas). It is the tragic tale of Magdalena (Lena), a beautiful secretary who is employed by the wealthy businessman Ernesto Martel (Gomez). When Lena’s father is dying, Martel pays his hospital bills and, with no other way to repay him, Lena agrees to become his mistress. Several years later, bored and sick of redecorating their palatial home, Lena decides that she wants to become an actress and in a desperate attempt to hold onto her Ernesto agrees to finance her first effort, which is being directed by distinguished auteur Mateo Blanco (Homar). Mateo falls in love with Lena at first sight, even though she is a terrible actress, and the two begin a clandestine affair. They have to be especially careful, as the suspicious Ernesto has arranged for his son, Ernesto Jr (Ochandiano), later known as Ray X, to film the making of as a way of spying on his lover.

Broken Embraces is simply gorgeous; deliciously filmed with a vivid, rich Sirkian colour palette through which Penelope Cruz struts in ridiculously high heels. She looks absolutely amazing whether in her Dynasty power suits or in cut-off jeans at the beach, and she and Almodovar work brilliantly as a team, seducing and hypnotising the audience. Lena’s beauty is as artificial as anything else in the film. The complicated structure is confidently handled and the story unfolds little by little, one question and one answer at a time, keeping us involved in the action.

Films about filmmaking are often much less interesting than people in the film industry would have you believe, but here the ‘making of’ elements are used with both comic and tragic effect, creating a parallel narrative to the main plot – Ernesto watching the grainy black and white ‘dailies’ while a lip-reader translates the lovers’ whispers. Almodovar even has Enesto push Lena down a magnificent staircase, seriously injuring her, in the way that people only ever do in films – usually when pregnant. Filming continues, even with her in crutches.

Many people have complained that Almodovar is treading water, and indeed the film explored many themes that he has looked at before; particularly duplication, and the often painful relationships between parents and their children (Ernesto/Ernesto Jr, Harry/Mateo, Magdelena/Pina). The film is perhaps not as deeply felt as Volver, but it is a subtle, glorious and enjoyable film nonetheless.