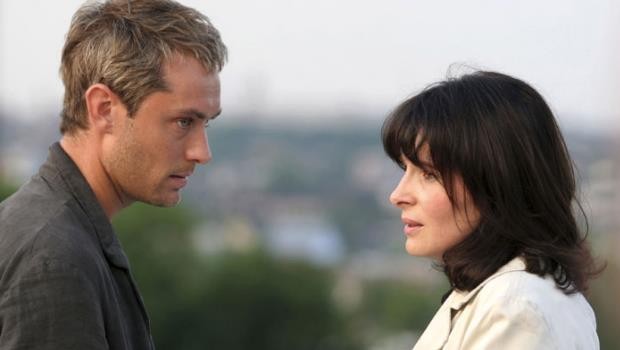 Oscar-winning director Anthony Minghella returns to his homeland – and to an original screenplay – for the first time since 1991’s Truly Madly Deeply, with this thoughtful, adult look at London in the new millennium.

Will (Law), a trendy architect, has, with his partner Sandy (Freeman), recently acquired new office premises in King’s Cross, part of the regeneration – and creeping gentrification – of the area. Unfortunately their state-of-the-art studio has enormous glass skylights, which makes things easy for a local gang of thieves. Fed up after yet another break-in, Will stakes the office out and chases one of the young gang members, Miro (Gavron) back to the tiny flat where he lives with his mother Amira (Binoche), a Bosnian refugee who works as a tailor. Will befriends Amira, hoping to investigate the burglary, but instead finds himself drawn to her.

Will’s home life is equally complicated. He lives with his half-Swedish girlfriend, Liv (Wright Penn), who spends most of her time worrying about her troubled daughter Bea (Roger), who never sleeps but spends her time obsessively doing gymnastics, leaving Liv little energy to spare for Will. When Amira realises that Miro robbed Will, she is prepared to do anything to protect her son.

There are two sides of Breaking and Entering. Minghella, who hasn’t made a film in London for years, brings a fresh eye to the city which takes it away from the Richard Curtis clichés and shows wildly differing neighbourhoods uncomfortably cheek-by-jowl – Primrose Hill, where Will lives a life of cool privilege, is bisected by the same canal that runs through Camden and King’s Cross to the East End. The film asks interesting questions about immigration, all the more relevant in recent years; how would London function without the people who clean the houses and pick up the dirt and do the jobs that used to be done by British people? And the fact that, as with Stephen Frear’s Dirty Pretty Things, many of these immigrants are, in fact, lawyers and doctors and engineers in their own countries, but in this country they are an invisible underclass.

Juliette Binoche’s Amira is a case in point; here she works as a tailor, and her husband’s relatives are thieves, but in Bosnia he was an engineer, and they were a respectable middle class family. Sandy is in love with Erica, one of the cleaners, but dare not approach her out of fear of seeming patronising; Will, on his stakeouts, befriends Olga, a prostitute still working the back alleys of King’s Cross. The tension between the aspirations of the planners and the reality of the area informs the film.

Less successful is the depiction of Will’s home life. Wright Penn is as beautiful and luminous as ever, but her character is never really developed, so her relationship with Will is hard to understand. Will is the usual selfish immature bastard that Law specialises in – its unfortunate that, knowing as much as we do about Law’s real life, that its hard to separate the actor from the character. Binoche is very good, her accent convincing, but again her relationship with Will is hard to understand. The supporting cast, including Ray Winstone as a sympathetic copper, are good, though Martin Freeman is underutilised, while we never really get an explanation of Bea’s condition. All the symbolism is a bit too neat – obsessive mothers, physically exuberant children, urban foxes – and the depiction of King’s Cross as one of the circles of hell is slightly exaggerated – it feels dated – there’s a Starbucks there now.

Breaking & Entering is a thoughtful and thought-provoking, adult drama. Though you may find yourself wondering: if Miro and his friends were such amazing free-runners, why they didn’t get jobs doing BBC idents rather than robbing buildings?