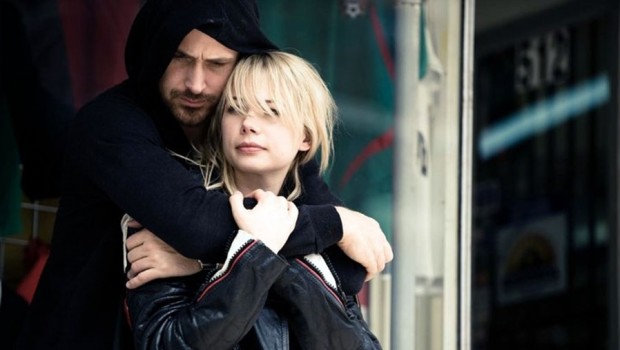 Summary: Blue Valentine is not a cheerful film, but it is searingly, impressively truthful.

Blue Valentine, hotly tipped for this year’s awards season, is perhaps the most honest depiction of a relationship gone sour that has ever been committed to celluloid. Cindy (Williams) is a hard-working nurse, the breadwinner of the family; Dean (Gosling), her husband, is a balding contractor who likes his job because he can drink a beer first thing in the morning and no-one will care, though he is a loving father to their little girl. Flashback to when they first met, and in true Hollywood style for blue collar Dean its love at first sight; Cindy, a smart girl with her sights set on medical school, is less interested, until Dean’s persistence and gentleness – and, lets face it, his adoration of her – provide a striking contrast with the aggressive frat boys she usually dates. But despite the rom-com cliches (he plays the ukulele; she can tapdance) of their romance – or perhaps because of them – they are so obviously mismatched that even Dean can’t believe his luck.

Sadly, as is so often the case, all the qualities that made Dean attractive as a boyfriend are exactly what makes him a useless husband; his lack of drive, his unwillingness to take things seriously, even his playfulness are maddening when Cindy needs to get their daughter dressed, fed, and off to school on time. Even his desire for the two of them to get drunk and have fun is irresponsible, as Cindy is on call. Sadly, a drunken night in the tawdry ‘Future Room’ of a love hotel (Dean has a voucher! Romance is not dead…) is probably the last thing any marriage, let alone one in trouble, needs.

Blue Valentine is not a cheerful film, but it is searingly, impressively truthful. Both Williams and Gosling disappear completely into their characters, neither of whom are particularly likeable, but are very real and recognisable. Cindy carries a painful sense of obligation to Dean which underlies her frustration at being bound to him, for better or worse. Yet Dean isn’t a villain; this is just a normal couple, getting on with their lives. Who knows why we fall in love? Who knows why we stop loving someone? Sometimes just the daily routine is enough to kill a relationship; love isn’t always enough. Like Love and Other Drugs, Blue Valentine isn’t afraid to ask sometimes painful questions and doesn’t sugar coat the answers.