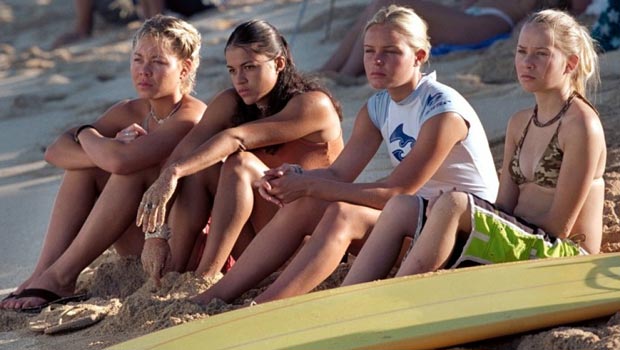 Summary: The tide soon goes out on this formulaic genre tale, washing away all trace of its marks in the sand.

The term “Mindless Escapism” was invented for this movie, and at 10am on a rain soaked London morning Blue Crush offers much in the way of visual relief. A gush of colour like sticks’ of seaside rock swirls through the opening credits to violently transport us to Maui: surfers paradise. Generic shots of people surfing are distorted with bright purples, pinks and greens, fluorescent yellows and oranges that stream through the brain like a tap of running rainbow. After the sugar rush has subsided it becomes evident that we are in teen paradise land, where anything is possible if you are under twenty, blond and beautiful.

Anne-Marie Sedgwick (Kate Bosworth) is a local “surfer girl” who fits this criterion with aplomb. She, along with her two flatmates Eden (Michelle Rodriguez) and Lena (Sanoe Lake) work dead-end jobs to survive and live for riding waves in their spare time. Anne-Marie’s obsession with the surf is identified in the opening scene, as she busily jogs along the deserted beaches as dawn breaks over the island, before returning home to wake up her friends in order to get down the beach early to catch the best waves. Yet Anne-Marie’s ability to go all the way and make it as a professional surfer (and in doing so strike a light for “Surf Chicks” everywhere) is shackled by her responsibility for her wayward younger sister in the midst of an absent mother, her denigration by male peers and her inability to recover competitively from smashing her head on the rocky ocean floor three years before.

Blue Crush adopts a familiar structure in complicating our heroines’ over simplified worldview on the eve of her greatest test. As Anne-Marie enters the final week of her preparation for The “Pipe Masters” surf competition, and her chance to rejoin the surfing worlds’ elite, she encounters vacationing quarterback jock Matt Tollman (Matthew Davis). What follows is the standardised Hollywood choice that the heroine is never, ultimately, forced to make. Anne-Marie struggles to keep her mind on training in the face of such well-chiselled and big-spending distractions, braving the wrath of the Barracuda-like Eden who warns against becoming just the latest flavour of the month for the NFL star when she is so close to the brink of professional fulfilment.

Predictably, Blue Crush offers very little that is new in the playing out of these tired scenarios, but hey, who cares because we came to vicariously soak up the sun and if you just lie back and let this film wash in and out of your mind, you will derive some pleasure from it. The locations are exploited to the extreme, enhanced by some wonderful camera-work that achieves a fluidity of motion in the ocean-going scenes and captures the majesty of Oahu through a number of different atmospheric conditions. The locked-off “board-cam” is particularly emotive. Its static position at the end of the surfboard looking back at the rider offers a disorientating and spontaneous insight into the tube-running experience. However all this good work is let down by the computer generated cut and paste job they have done with placing Bosworth’s face on the surf doubles’ face in a number of close-ups, conceived in an effort to make the surfing sequences appear like the actors’ are actually doing their own stunts, it simply serves to intensify the disparity.

Blue Crush is a vacuous, yet enjoyable, teenage fumbling that offers little to engage with past all that shimmers gaudily on the surface. The marriage of adolescent longing and extreme sports is a happy, if unadventurous one that will add an extra dimension beyond its apparent chick-flick credentials. In adapting surfing sub-culture as its filling, Blue Crush displays specific visual and plot-related resonances with similar seafront epics. However, it lacks the visceral impact of Katherine Bigelow’s Point Break, or the existential poetry of John Milius’ Big Wednesday (two excellent yet highly contrasting wave-riding narratives of the past) and instead merely ploughs many of the same plot lines with little complexity. Blue Crush is bright and foamy, immediate and energetic. Aimed squarely at the teenage audience, it drip-feeds the audience colour and comfortable, safe excitement in a neat, glossy package. But the tide soon goes out on this formulaic genre tale, washing away all trace of its marks in the sand.