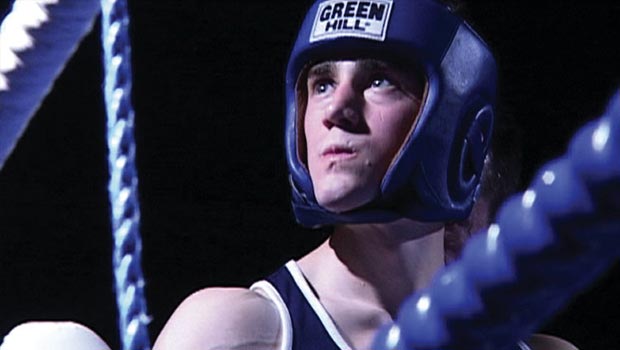 Summary: An engaging and entertaining exploration of the psychology of ambition and sport.

Blue Blood is a documentary that will probably alienate as many people as it engages. For starters, it’s about boxing. To add insult to injury, it’s about amateur boxing. At Oxford University. Specifically, the struggles of a handful of young men to make it as Oxford Blues (a subject last, and grotesquely, explored on film in the eighties, in a feature starring Rob Lowe and Julian ‘Kiss of Death’ Sands). A minority interest at best, yet for the most part director Stevan Riley succeeds in making an accessible and entertaining film about what could potentially be an alienatingly arcane look at Varsity sports.

For those who don’t know, a ‘Blue’ is a sportsman chosen by Oxford or Cambridge to represent their university. The most famous example of this is the Oxford and Cambridge Boat Race that holds a place in the public mind out of all proportion to the actual achievement. (The fact that some of the oarsmen are also Olympic athletes may have something to do with it, but really, how many people normally watch rowing?) But you can be a Blue at all sorts of things, fencing, shooting, dancesport (whatever that is, and that’s just for girls, of course). The film is only interested in boxing though, and gives the slightly misleading impression that this is the only ‘blues’ sport, and also implies that these contests have been going on for 750 years. Though Oxford is the oldest university in the English-speaking world, founded in the 11th Century, Varsity sports are a Victorian invention.

Anyway. I went to Oxford, so care about these things. Many others may not. So – onto the film!

Blue Blood follows five young men from varying backgrounds as they join the Oxford University Amateur Boxing Club in the hope of attaining the ultimate prize. They are: (Chris) Kavanagh, who looks as if he needs a few protein shakes; Fred, a bit of a metal fan, with anger issues, mocked by his ‘friends’ for struggling with cutlery; Charlie, the golden boy, fine artist, lady magnet; Justin, astrophysicist, American, Christian, ‘can-do’ type; and Boiler, stubbornly ambitious, now trying boxing after three seasons trying to become a Rugby Blue. At the time they join, Oxford is on its uppers having not had a victory for two years, so their coach, Des, is desperate for a win and looking for the best.

You might wonder where the other Boxing Blues were, as everyone in training seemed to be new and completely inexperienced. Don’t public schools offer boxing lessons, in the tradition of Gentleman Jackson? Apparently not, though whether this is truly the case or an editorial decision to amp up the tension, I don’t know. Inexperienced boxers look silly, ducking and weaving and shuffling their feet. The boys all work hard and soon Coach Des thinks they’re ready to go in the ring. Kavanagh has his nose bloodied sparring at the club, but Boiler is destined for bigger things, a fight at Sandhurst. Humiliated by his much more experienced opponent, Boiler nonetheless digs deep and returns to training. Kavanagh, in his first proper fight in the Oxford ‘Town & Gown’ match in front of spectators is also humiliated; he also decides, on the advice of his friends, not to return to boxing.

Where the film is most revealing is as ‘Varsity’ approaches and all the boys dig deeper. Justin, with his ‘go big’ attitude, is running a lot. Fred, struggling to make weight, gives up carbs and his academic work suffers (bet he’s grumpy too). Charlie is scared, and boxing against medical advice; even Boiler is almost overcome by doubt. But they are thrilled to make the team and, as Charlie points out, it does increase your chances with the ladies.

There are some scenes of poshness that may turn your stomach but generally this is an engaging and entertaining exploration of the psychology of ambition and sport. But I couldn’t help being thrilled that Justin lost his match.

Related:
An interview with Stevan Riley, director of Blue Blood