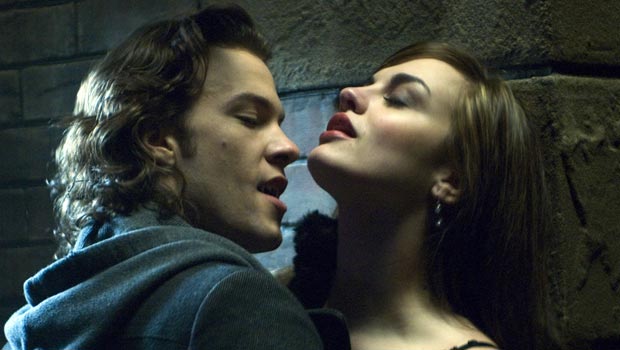 Missing Buffy? If, like me, you were a big fan of the Buffster, you could do worse than check out Blood Ties, a new and slightly more adult supernatural crime series.

Vicki Nelson (Cox) is a tough girl cop-turned-PI who happens to witness a brutal murder. Incorrigably nosy, Vicki can’t help but stick her nose in, despite discouraging noises from the PD and especially her ex, Mike Celluci (Neal). And then she meets Henry Fitzroy (Schmid) – anyone been watching The Tudors? – a pretty young comic book writer with unusual strength and speed and a charm of manner that some might call mesmerising. Henry is unusually upfront – he tells her pretty much straight off that he is in fact a vampire, that he is 470 years old, and is in fact the illegitimate son of Henry VIII.

Vicky s remarkably accepting of this, and of Henry’s help (unlike Angel, he doesn’t have a soul – he prefers to dine on willing partners and criminals) battling the forces of evil, and every week they tackle a new evil, including a voodoo princess, a telekinetic killer child, an incubus, zombies, Irish people and one of the furies.

It’s all very Buffy like – especially in season one and early season two, when Buffy battled ‘demon of the week’. There isn’t really a seasonal story arc, though the developing attraction between Henry and Vicki and Mike’s jealousy is developed through the show. Of course Vicki isn’t Buffy – so far from being a superhero, she is actually going blind, which luckily doesn’t seem to stop her. She has a sort of truncheon, and isn’t afraid to use it; she has Angel and Xander – sorry Henry and Mike – and she even has a Willow – a goth girl called Coreen (Holden) who answers the phone and does the internet research thing.

Pleasingly Christina Cox is not 22 with plastic breasts; both she and Gina Holden, while very attractive, look relatively normal, plus Vicky has to wear glasses due to her condition. She is tough without being obnoxious, which is quite a difficult act to pull off. Less successful is the male casting- Kyle Schmid might not look like Jonathan Rhys Myers but he smirks just as irritatingly; both Henry and Mike spend a lot of their time chasing after Vicky, who despite all their advice will keep trekking off to crime scenes on her own.

This is where the show falls down a little – because she doesn’t have any powers of her own, or really know anything about the supernatural, you might expect Vicki to be a little bit less impetuous. She seems remarkably ready to trust people and this often gets her into sticky situations from which Henry has to rescue her, though in turn he sometimes needs rescuing and isn’t as invulnerable as you’d expect a vampire to be.

Blood Ties isn’t stunningly original, but it’s certainly entertaining, and recommended for fans of Buffy and Angel as well as police procedural shows like CSI: Vicki has a helpful relationship with the coroner, who tells her the details that no one on the force wants to hear. And sorting out Vicki’s love life could take seven seasons.